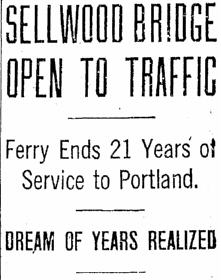 For 21 years the ferry John F. Caples has done valient service in transporting Portlanders to and from Sellwood, connecting the east and west sides. Now it has been supplanted. During those years Portland has seen the development of the automobile: it has seen a vast increase in motor traffic, bringing with it harassing problems of vehicular control: it has seen a need created for greater ease of trans-river communication.

And so it is that yesterday saw the end of active service at Sellwood for the John F. Caples. In its place now towers the new $500,000 Sellwood bridge, which, at exercises attended by thousands of Portland residents, including hundreds of school children, was officially thrown open to traffic yesterday afternoon.

1,092 feet long and 28 feet wide, the Sellwood Bridge was the first fixed-span bridge on the lower Willamette River and a pioneer in area bridge technology. Gustav Lindenthal, a renowned bridge engineer, designed the bridge, and it was constructed by Portland’s Gilpin Construction Company.