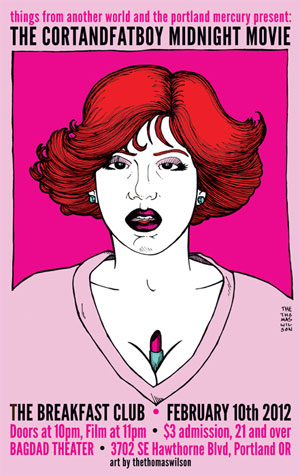 For the second 2012 installment of their Midnight Movie, Cort and Fatboy present The Breakfast Club (in 35mm) on Friday, February 10 at the Bagdad Theater (3702 SE Hawthorne).

For February’s entry in the cortandfatboy Midnight Movie series, we present a 35mm print of John Hughes’ most heartfelt film, his love letter to the awkward, beautiful, sad, and hilarious horrorshow that is High School, his magnum opus as a writer and director: The Breakfast Club.

This is a film that reinforces the mythology of the High School experience while simultaneously exploding that myth all over the inside of a library. It is Sartre’s No Exit with fingerless gloves, a letterman’s jacket, and lipstick tucked into its cleavage. It is the story of a brain, an athlete, a basket case, a princess, and a criminal.