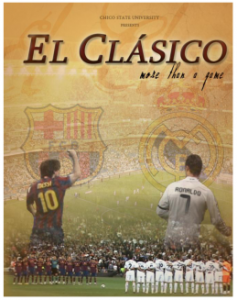 In April 2010 nine CSU, Chico students spent two weeks in Barcelona and Madrid on a soccer adventure. They had the opportunity to interview world-famous soccer stars Cristiano Ronaldo Thierry Henry, Iker Casillas as well renowned journalists, politicians and historians. They attended two major games, one of which was the El Clásico, the titanic battle between Real Madrid and FC Barcelona. This game is one of the most famous and widely watched sporting events in the world. Throughout the process the students learned that this monumental rivalry is not just a game of soccer but a way of understanding the very complex culture, history, and regional identity of Spain.