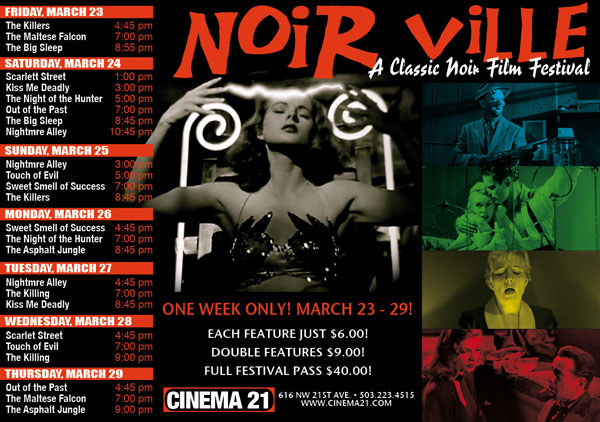 A Touch of Evil, The Big Sleep, and The Maltese Falcon are three of my favorite movies* of all time (seriously, they’re in my top 20, with A Touch of Evil in the top 5), so I was rather excited when I read about Noirville: A Classic Noir Film Festival at Mad About Movies, Shawn Levy‘s OregonLive movie blog.

After its weeklong engagement of a pair of 1962 classics (“The Manchurian Candidate” and “To Kill a Mockingbird,” both of which start today), Portland’s Cinema 21 goes even further back in time for a week of classically atmospheric crime and low-life films in a series called “Noirville.”

* The Night of the Hunter is also a great movie, but Robert Mitchum is so goddamned creepy in it, there’s no way anyone will ever convince me to watch it a second time.