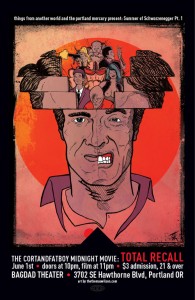 Total Recall is the featured film at the cortandfatboy Midnight Movie, on Friday, June 1, 2012 at the Bagdad Theater (3702 SE Hawthorne).

And thus begins our Summer of Schwarzenegger.

Normally, we try to augment the summer blockbuster season by pulling from bonafides from the past. Hollywood spits out a Transformers movie, we decide to show Raiders of the Lost Ark. Fast Five is coming to town? That’s cool, we’re showing Top Gun. That kinda thing.

This year, we decided to haul out the big gun himself, and as many a producer did in the late ’80s/early ’90s, we’re turning the summer over to Arnold Schwarzenegger. A trilogy of marble-mouthed mayhem will explode across the Bagdad screen for the next three months, beginning with Paul Verhoeven’s ridiculous sci-fi cartoon, Total Recall.

What are the odds the upcoming remake, directed by That Guy Who Did Die Hard 4 & The Underworld Movies, will be even a third as garish, lurid, unapologetically hyper-violent, and most importantly, goofy as all hell? I’d bet on the sure thing, myself: Bet on Kuato. Bet on Cohaagen. Bet on Jonny Cab, and triple-breasted women, and visuals that will make your eyes pop out of your head.