This guest post is graciously provide by friend-of-the-blog Rick, of Beerdrinker.org and @m8ryx on Twitter – thanks Rick!

When Dave asks, it is imperative that you do the right thing. Especially when it’s “Hey, Rick, would you like to checkout this new restaurant that serves tasty BBQ and delicious grown-up beverages?” So, I did the right thing: show up to Southland for a preview of their tasty menu.

Southland Whiskey Kitchen (1422 NW 23rd) is a new project by the folks who brought the Casa del Matador (1438 NW 23rd) to Portland, located just a couple doors. Not that other (awesome but totally different) Matador. The first thing you notice is the decor. As you may have noticed at their Matador with the intricate ironwork, these guys are chronically attentive to detail, with a simple but elegant wood decor and some awesome light fixtures that I won’t endeavor to describe, as my effort will fall short so you should probably go check them out (but props to Hippo Hardware for providing the moody bulbs). The space has a large open air section facing NW 23rd, openings that were not there when it was the Clear Creek Distillery. 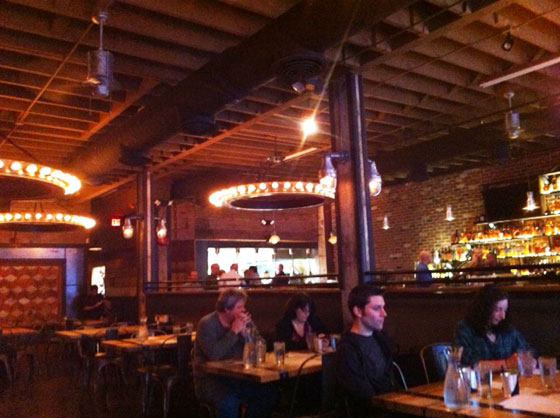 The menu is heavily Southern without many concessions, most of which live in the sides and salads, to vegetarians. Vegans need not apply, unless you’re just looking to quench your thirst. Everything I ate was pleasing. There were two standout items: the collard greens, and the spicy shrimp with grits. The biscuit was a thing of beauty, and went nicely slathered with honey butter and brisket.

Eric (my date) and I disagreed on the fried chicken. There was consensus that the meat (we both had thigh) was juicy and tender, but butted heads on the fry. It comes down to a matter of preference, I like mine a bit crispier and spiced, and Eric likes it the wrong way. Don’t tell anyone but the fried chicken may become available in ‘n waffles format with the advent of a brunch menu.

They were nice enough to bring us key lime pie for dessert but I was so stuffed on main course items I only shoveled a couple quick bites into my mouth on my way to tour the kitchen. Please remember folks, we’re professionals, excelling at planning, pacing, and execution.

Okay. Now on to the bar. The wonderful, wonderful bar. The bar is wide. With whiskey. The only place in town I can think of with a comparable list is the Brooklyn Park Pub (3400 SE Milwaukie). Southland specializes in American bourbons, ryes, and whiskeys. A rough count or their list shows about 120 American selections. They appear to be well curated, with a selection that reaches into the Canadian, Irish, and Scotch varieties as well. 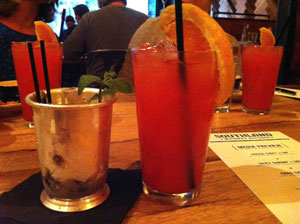 We were served a variety of hard and soft mixed drinks throughout the evening. I was presented a Mint Julep just for walking in, YMMV. The julep was great. I was parched from the long drive to NW 23rd from the office, and the crushed ice worked wonders with the classic refresher. It had a sweetness, but over the top for me, unlike the Southern Punch. My date Eric loved them both, but I tend to shy away from beverages with “punch” in the description. For the kiddies and DDs (can’t think of anyone else) they have their scratch lemonade. They make it from lemon juice and sugar. Again, super-sweet, but I think that’s how it’s done in the South.

Meal service closed with an Old Fashioned. Ah, back to my kind of drink. This was the most avante-garde of the bunch, with a big ice cube and a suspended cherry (next to the ice, not in it). The effect was of a somewhat deconstructed Old Fashioned, which you could drink from different sides of the ice for slightly different effects.

Happily, we got to checkout the kitchen, which was pretty classy with its mesquite grill and big ‘ole black smoker. It smelled wonderful in the back with the local apple wood smoking the meats, but I can see why they do their best to vent out and up, since some customers may object to a smoky meaty sauna.