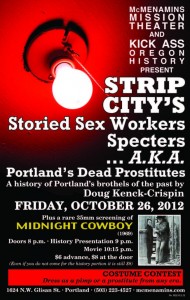 Ribald Historian Doug Kenck-Crispin will be on hand to share ghostly tales – about sex worker from Strip City.

Some are ghosts, yes, but some are just whores of yore – famous sex workeres from our city’s past who deserve a little retelling . . .

We will talk about these ladies that have graced Portland’s past, and examine a few establishments haunted by their specters. We will discuss why sex workers are particularly vulnerable, and disappointingly, seemingly expendable.

(For a preview check out the most recent episode of the Kick Ass Oregon History podcast: Portland’s Dead Whores.)

The nights activities also include a costume contest: dress like a Pimp or Whore, from ANY era. The grand prize is a night’s stay at The White Eagle, one of Portland most famous former haunted whorehouses.

And finally, stick around for the 35mm print screening of one of the classics of the prostitute film genre, Midnight Cowboy, staring starring Jon Voight and Dustin Hoffman [the “I’m walking here” scene is one of my favorite scenes in all of film!].