An article in The Sunday Oregonian explores Portland’s plans for future streetcar lines. “City leaders” want to expand the streetcar network throughout the city.

A streetcar could generate business and political momentum for clusters of midrise housing and commercial centers that could spread the walkable feel of popular urban neighborhoods.

I understand it’s politically expedient to emphasize the benefits to business when the government is selling a plan, but what strikes me about the streetcar discussions is that actual transportation gets nary a mention.

The current streetcar route, and the planned Eastside streetcar loop don’t serve commuters much, though developers salivate. Whereas a line out Martin Luther King Boulevard, or NE Broadway, or Sandy, or Belmont, or Hawthorne, or Woodstock, or . . . wait a minute.

The ZehnKatzen Times points out the new streetcar plans look a bit like, and perhaps should look more like, Portland’s world’s finest trolley system circa 1940. Portland already has relative density, and therefore potential streetcar riders and commuters, along many of the city’s main thoroughfares, most of which formerly accommodated streetcar lines.

In fact, Portland’s most revered inner city neighborhoods and business districts were originally developed along streetcar lines. For evidence of this in visual form, check out Historic Portland Trolley System Maps.

Though transit often gets short shrift in discussion of Portland’s streetcar future, most of those routes under discussion appear to be good transit routes too, so I assume the planners are taking that into account even if they don’t talk about it in public.

Some folks do, however, talk about transit in public. Below are some sites I highly recommend.

Portland Transport
A conversation about access and mobility in the Portland/Vancouver region.

HawthorneStreetcar.org
Advocating for a streetcar line along Hawthorne (a transit, though not political or property developer, no-brainer).

The Overhead Wire
Sending up transit and TOD with a little unconventional wisdom
Not Portland specific, but relevant to the discussion. Make sure to check out the right column Fixed Guideways, aka Blogroll, to find lots of other blogs and sites about transit, urban planning, rail, transit oriented development, etc.

The Timbers offense impressed last night at PGE Park. It was a pleasant surprise after a long season of stalwart defensive play but anemic offense.

Assisted by Roger Levesque, Bryan Jordan started things off in the 19th minute, and then just as the brand new giant flag in section 107 was lowered back to the first row he scored again (20th minute, assist by Miguel Guante) to put the Timbers up 2-0.

Toronto scored next, but could not find an equalizer. Miguel Guante bagged his own goal, off a Tom Poltl assist, right before half time to put the boys in green up 3-1.

As usual SoccerCityUSA has an excellent recap, plus photos and videos (including Olum’s awesome nutmeg and what should have been an assist to give Bryan Jordan a hat trick, but alas the keeper made the save).

Beerdrinker.org also has a great recap, plus photos.

From the Oregon Bus Project:

The Oregon Bus Project and the Portland Mercury team up again Tuesday, October 30th to offer you an evening of rousing debate about the OLCC. This debate is the fifth in the monthly Debate Club series held at rontoms on 600 E. Burnside (this month’s at 8pm).

The raucous democracy showdown of our monthly Debate Club continues as we dig into Oregon’s alcohol policies. The debate itself will be filled with snappy questions and quick rebuttals. Rich Rodgers, Senior Staffer for Commissioner Erik Sten, will be moderating the debate and keeping the peace as the panelists face-off. It’s not a new issue, but for the first time in recent history, the Oregon Liquor Control Commission is considering ways to modify those regulations. Panelists include Cary Clarke of PDX Pop Now!, an OLCC representative and others with the issue. The OLCC is taking public input on the regulations until mid-November.

Debate Club was created by the Bus Project and Portland Mercury to spark public discussion on pressing topics and engage young people in citizen-driven political activity.

Debate Club will be held at rontoms (600 E. Burnside) at 8 PM on Tuesday, October 30th. Free! **BIG apologies to anyone under 21! The OLCC has mandated that event be 21 and over only.

Please contact Tara Sulzen with any and all questions: (503) 233-3018 or tara.sulzen@busproject.org

The weather couldn’t be better for the post-season exhibition match between the Portland Timbers and Toronto FC tonight at PGE Park.

But on this unseasonably warm day one member of the Timbers may receive a cold welcome from the fans. Gavin Wilkinson has filled some post season holes in the roster with three guest players: former U of P Pilot Miguel Guante of Miami FC and Kenji Treschuk and Roger Levesque of the Seattle Sounders. Roger Levesque has been a thorn in the side of the Timbers the last few years, in addition to having a reputation for dirty play. Check out the Official Why We Hate Roger Levesque thread at the SoccerCityUSA.com message board for all the Roger Levesque execration you can handle.

Never the less, kickoff is at 5pm.

All you Portland and Toronto players & fans get one last shot at footie glory before the long, cold winter. Toronto visits PGE Park tonight in a rare post-season friendly. Hopefully for Toronto’s sake they get a better reception than those other Canadians that frequent the city.

Separate the handful of big-money, marquee winners. Swap the rest of the players on a Major League Soccer roster with Portland Timbers starters or other players from the First Division of the United Soccer Leagues.

You wouldn’t notice much difference.

The Columbian – Timbers players get one more chance to make impression

For players with both Toronto, which just finished its first season in Major League Soccer, and Portland, the exhibition match is an opportunity to make a last impression on coaches who are looking to upgrade their rosters.

The Columbian also adds its 2 cents to the MLS to Portland discussion: Facilities main obstacle for an MLS Portland team

Bottom line: Garber said the MLS is interested in Portland, but only if PGE Park is refurbished to make it a first-class soccer facility. 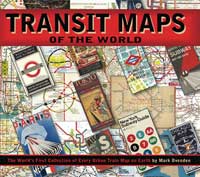 Transit Maps of the World, due to be released next Tuesday, is already available and stashed at the Quimby warehouse according to Powells (no sign of it yet at the library).

Transit Maps of the World is the first and only comprehensive collection of historic and current maps of every rapid-transit system on earth.

If it’s comprehensive, I can only assume TriMet’s glorious cartography (pdf) is included!