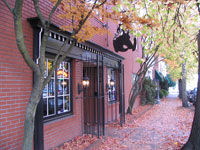 I was perusing the calendar of Oregon beer events over at On Tap, the blog of the Oregon Brewers Guild, when I noticed that, just in the first week of November, there are quite a few beery events in Portland that feature some of my favorite beer styles: strong stouts, doppelbocks, and winter beers.

Tuesday, November 3rd the Launch Party for The Abyss takes place at the Deschutes Brewery Portland Pub (210 NW 11th). The Abyss, as you no doubt know, is an imperial stout, part of Deschutes Brewery’s Reserve Series.

Friday, November 6th the special beer is the Bourbon Barrel Doppelbock at the Lompoc Sidebar (3901A N Williams).

This beer was brewed in Nov. 2008, transferred into bourbon barrels in Jan. 09, aged for nine months, then cellared for two more in a conditioning take, and bottled this October. It features a malty body with notes of vanilla, raisins, caramel and oak. 8% ABV. 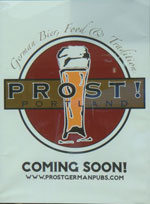 And, in addition to all these beer events, the new German pub Prost! (4237 N Mississippi), adjacent to the Mississippi Marketplace at the corner of North Skidmore and Mississippi, opened just last Thursday.

Grab a bite to eat from one of the carts, and bring it into the pub to enjoy – all they ask is that you buy a beer to accompany it. You’ll have eleven German beers on tap, and around ten in bottles to choose from. And if the carts’ offerings don’t strike your fancy Prost! serves up their own German-style snacks: sausages (sourced locally from The Original Bavarian Sausage), fresh-baked pretzels and sandwiches, with most things under $10.

Really, there’s no excuse not to drink copious amounts of beer this week. Check out the On Tap calendar for even more events. 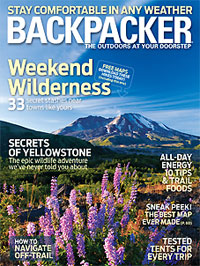 The Wild Edge: Exploring Portland’s Forest Park, appearing in the October 2009 issue of Backpacker Magazine, is a fascinating article by Portland writer Bill Donahue about the crown jewel of Portland parks.

The park is described eloquently, as demonstrated in the excerpt below:

On hot summer days, when the sidewalk downtown is baking and the air feels dead and still, I think of the leaves on the maple trees up there in Forest Park–in the hills just west of the center of Portland, Oregon. They’re almost iridescent green, and veiny, and bending in the breeze amid the evergreens. The trees are a little higher up, elevationwise, than the city’s streets–kind of like heaven–and you know that, if you get up there and start walking around under those leaves, you’ll feel the soft springiness of the ground. You’ll feel the pine needles underfoot on the hiking trails, and it will feel like the world is suddenly breathing again.

But as the author explains, not only is Forest Park the easternmost sliver of a wildlife corridor that stretches on, virtually uninterrupted, some 80 miles to the coast, it’s also a second-growth forest set within a metropolis of 2 million people who engage in an intricate, daily dance with the wilds. The article is not, surprisingly, about the park, per se, it is about the people of the park.

Bill Donahue takes a walk along an edge of the park being encroached upon by suburbia with Les Blaize, who’s lived for 30 years in a ramshackle cottage surrounded on three sides by the park. He locates and talks to one ornery man, who has been camping in Forest Park for three decades, and he communes with nature with Fred Nilsen, now retired, who served for two decade plus as Forest Park’s chief arborist. And Bill Donahue shares his own experiences with the park.

It’s a fascinating account. You can read it here: The Wild Edge: Exploring Portland’s Forest Park.

All I got are some FANTASTIC BUMPERSTICKERS 😉

But I do wish I had come up with this: 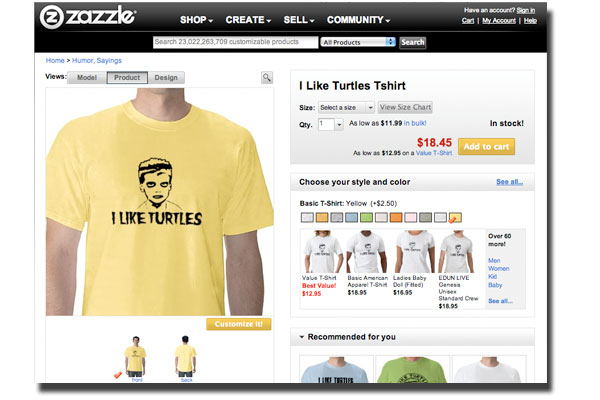 For those not from Portland, some background from the Washington Post: For the ‘I Like Turtles’ Boy, 17 Seconds Of Fame, and here’s what started it all:

A reminder to Portland Timbers season ticket holders – renew your tickets before November 1st to get them at 2009 prices; you’ll pay more if you wait! – I got mine!

The offseason continues, but there is plenty of Timbers news to talk about over the past few weeks, especially with the USL season officially completed back on Saturday, October 17th. I’m playing a bit of catchup, but will talk about a lot of items affecting the USL and the Timbers, as the USL wrapped up its 2009 campaign.

The USL did give out its end of the year honors, and some of the boys in green and white were amongst the group of people being considered in the categories of Most Valuable Player, Defender of the Year, and Coach of the Year. [More]

Paulson, Portland should be a good fit — if he figures out how things work here By Anna Griffin at The Oregonian

[Merritt Paulson] could be a major player in Oregon’s future, particularly if we hope to ever woo another major sport. But to do that, to even get the current deal done, he must learn even more about how business works here, about the unique challenges required to succeed in a place that’s so innately skeptical of the power and money he seems to represent. [More]

“I am very honored and proud to be recognized for my contribution to the USL,” said Conway. “My years in Charleston and brief time in Portland provided many memorable and enjoyable moments. As the USL continues to play an important role in the development of soccer throughout North America and beyond, being recognized as an individual who helped contribute, albeit in a small way, is personally very rewarding.” [More]

Portland Loves Its Grass By paulsepp at Dropping Timber

With the renovations to PGE Park looming on the horizon, many fans have begun to wonder if the 2011 Portland Timbers will be playing on natural grass or will they be forced to continue on the artificial turf? [More]

Meanwhile, like during every United Soccer League off season, there are rumors and news and conflicting reports about the viability of the league and teams. For example, from October 28th:

Report: Whitecaps, Impact will not return to USL in 2010 at TSN

Although the Montreal Impact defeated the Vancouver Whitecaps in this past month’s USL final, it appears as though neither team will be in the league next season according to one of the league’s two owners, Alek Papadakis. [More]

Contrast that with news from October 29th:

“We are excited to hear of the USL plans,” said Montopoli in regards to USL opening a Canadian office.

It is expected that Canadian expansion will be a topic of serious discussion at next week’s USL-1 League Owners meeting in Beaverton, Oregon. [More]

OurPDX‘s Betsy Richter periodically assembles a Shared Links post, which consists of, in her words, what we’ve found as we’ve traveled the local PDX web, and which includes link to and brief excerpts of recent interesting posts.

It’s flattering that a few of my posts have made the lists, and almost always I’m introduced to a great blogger’s work of which previously I had been ignorant (as is the case with the excellent Cocktailia blog which I just learned about from yesterday’s Shared Links, and which I’ve already added to my blogroll).

So in the same spirit as OurPDX’s shared links, I would like to highlight a few recent blog posts I have found particularly interesting or impressive or informative or just plain amusing, all of which happen to be from blogs in my blogroll.

Did you know that Portland has a mysterious geographical location where gravity is different and paranormal happenings take place? A place where those fascinated with either beer or science fiction or both will find themselves trapped and unarmed?

We went to Bob’s Red Mill, inspired by the 2009 World Porridge Making Championship. What, you didn’t know there was a championship for porridge making? It’s in Scotland. What kind of rock do you live under?

[The post is too short to really excerpt, and it includes a video – just follow the link!]

Just another day in Portland from Brewcaster

[It’s another video, filmed on a lovely early fall day.]

Reasoning with the river – from beerdrinker.org

I was beginning to remember why I don’t fish. But I got another lure strung to a leader and got back on the water. Cast. Snag. I tried to work the usual magic. Let some line out, whip it around, walk the shore up and down. To no avail. The lure was lost. At this point I was done. Totally freakin done. [or was he . . . ?]

The 2009 pdxplate Awards – from pdx Plate

About a year ago, a small message board was born out of the idea that despite the unusually large number of food sites here in Portland, there was a kind of conversation that wasn’t taking place. Instead of the usual forum babble of “have you gone?” and “how is the?” and “where should I?”, the singular driving mantra of pdxplate has been one of blazing your own food and drink trail, jumping without a net, and mixing metaphors. Taking one for the team. It’s a simple notion, but a powerful one, and it’s what this site is all about. A year’s worth of eating and drinking led to some great discoveries, and to commemorate pdxplate’s one year anniversary, here is a look back at the Plates of the Year.

A Day of Romances – from XUP

Walking to work. On the path ahead is a small fawn. It doesn’t move as I approach; only looks at me curiously. I’m close enough to reach out my hand, inches from its muzzle. It sniffs my hands curiously. After a wonderfully mesmerizing few moments, I tear myself away and walk on. As I walk, I turn around to wave good-bye. I’m startled to see the fawn right behind me.