What’s going for Portland? The Guardian‘s Tom Dyckhoff says lots. Portland is at the top of the list in his article The five best places to live in the world, and why.

Do you like letterpress? Do you like vintage clothes? Do you play in a nu-folk band? Then get ye to Boise, Eliot and Overlook in Portland. The city has been the capital of liberal, hipster USA for decades. The Dandy Warhols wrote Bohemian Like You about their very home town. There are some, indeed, round these parts who’d like the entire Pacific Northwest to break off from the rest of the US and go it alone. So very liberal is Portland that it’s a home from home to anyone from Europe, especially if they read the Guardian.

Joseph Rose‘s Friday Hard Drive column hit the nail on the head: MAX beating was ugly, but the reaction by some has been just as bad.

And it also disseminates some telling statistics:

The assault of Karley Buckland was one of just 36 reported on a light-rail system with 41 million boardings last year. By comparison, the Bay Area’s BART system – with turnstile access and its own police force — had 19 last month alone. In 2011, there were about 20 carjackings in Portland and 319 Oregonians died on the road. Does that mean we should discourage our 16-year-olds from learning to drive? Frankly, I worry more about my 17-year-old daughter – who isn’t in a rush to get her license — getting hit in a crosswalk than her being a TriMet crime victim.

Your odds of being assaulted on MAX are about one in a million. About the same as your odds of drowning in your bathtub, or being struck by lightning (no, really).

The crime rate has been declining on TriMet for years (though there was an uptick in 2010 when the Green Line opened), and the rate of violent crime nationwide is at a nearly 40 year low.

Your odds, in any given year, of dying in a workplace accident are 1 in 48,000, so your transit commute may actually be the safest hour(s) of your work day. Transit is also far safer than driving – in 2008 the passenger death rate on buses was .08 per 100 million passenger-miles (as opposed to .55 for automobile passengers).

Humans are bad at risk assessment, so it would be natural if a report in the news triggers a fearful reaction. That doesn’t make you an idiot, it makes you human. But you ARE an idiot if, upon learning how rare the risk is, you still cling to your irrational fear, or perpetuate the myth that riding the MAX is “dangerous.” 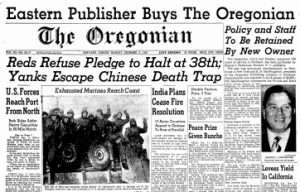 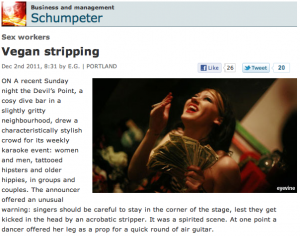 The Economist reports on Vegan Stripping in Portland:

Peaceful, green, and liberal, Portland has a reputation for being unusually socially conscious. So visitors are sometimes surprised to learn that it is a plausible contender for the title of lewdest place in America. It has more strip clubs per head than any other city; in its compact downtown, sex shops are scattered amid the bookstores, coffee bars and social services. This is apparently down to the combined influence of west-coast liberalism and frontier manners. (In the 1960s, there was a public outcry in Oregon when the Bureau of Land management briefly renamed one “Whorehouse Meadow” with the euphemistic “Naughty Girl”.)

Like most articles on this topic, the author fails to touch on the real reason, however, Portland has so many strip clubs: Article 1, Section 8 of the Oregon Constitution.

Courts and voters (e.g. Oregon Ballot Measure 19 in 1994, and Measure 31 in 1996) agree: the Oregon constitution provides greater individual freedom of speech than the First Amendment to the Federal Constitution.

“[W]e have little trouble in concluding that the people who framed and adopted Article I, section 8, as part of the original Oregon Constitution intended to prohibit broadly any laws directed at restraining verbal or nonverbal expression of ideas of any kind.” – State v. Ciancanelli (Oregon Supreme Court, 2005)

So in Oregon you can’t zone “strip clubs” or “adult bookstores” into particular “nightlife” districts, nor can you label anything they provide “obscene.” Oregonians (I’m a particularly proud one) take freedom of speech seriously. 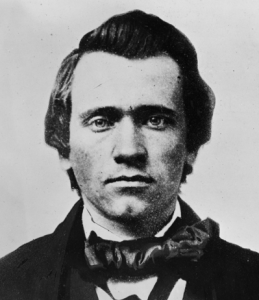