Small distillers from around the country come to offer samples of spirits and share schwag in the form of buttons, stickers, and brochures. Once again the festival also features the Portland Cocktail Invitational, a competition sponsored by the Oregon Bartenders Guild and Imbibe Magazine. Two dozen star bartenders from across the country compete for the $1000 grand prize.

A one day pass, which includes 3 taster tickets, is only $10. $16 gets you in both days. Additional taster tickets can be purchased of course. The list of participating distilleries is impressive; it includes all the well known locals (except Clear Creek – why doesn’t my favorite pear brandy purveyor participate in these events?!), plus distilleries from as far away as Vermont (Vermont Spirits), New York (Tuthilltown Spirits), and Central America (Ilegal Mezcal).

Heather, our friend Diane, and I attended the festival last year, and enjoyed quite a few samples of interesting distillations, including several absinthes, New Deal‘s newly OLCC approved (at the time) Mud Puddle Chocolate Vodka, and Bend Distillery‘s Cofia Hazelnut Espresso Vodka, which would have been great on top of ice cream! 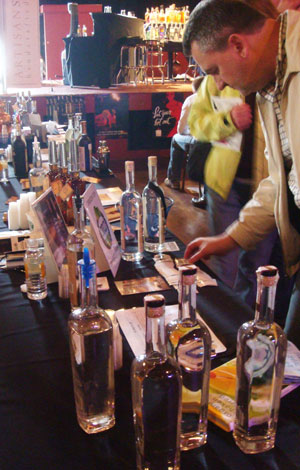 Suppose your Bloody Mary demands a shot of Hot Monkey. What if you suddenly have a craving for a thimbleful of smooth Apia Artisan Vodka? Maybe you’re reading Baudelaire and feel that Trillium Absinthe will enhance the effect?

Have you ever made a special trip to the liquor store, only to find out they don’t carry what you’re craving, leaving you with only one real option, a mason jar of Hood River Vodka?

Good news! The OLCC has launched a site that helps you find exactly what you’re looking for: Oregon Liquor Search.

You can search by brand, or category, correlated to your zip code. Or browse categories and locations. The site displays google maps and everything!

I learned about this via the excellent New Deal Distillery newsletter, which you can sign up for here!

House Spirits (2025 SE 7th), crafters of Aviation Gin and Medeyof Vodka, host an open house Saturday from 1pm-4pm (21 and over only). In addition to tours and tastings their highly anticipated Absinthe Marteau, developed by the Wormwood Society‘s Gwydion Stone, will make its debut.

Fall is the time to visit distilleries. Travel Oregon has gathered a long list of wine, food, and booze events through the end of the month under the Oregon Bounty mantle.

A couple weeks ago we visited Artisan Spirits‘ open house, and found the experience thoroughly edifying. New Deal Distillery hosts an open house Saturday the 15th, and Highball Distillery will be opening their doors to guests on Saturday the 22nd.

The 4th annual Montavilla Brewfest takes place Saturday, noon-9 in the parking lot behind Thatchers (where you can order your hamburger with pepperoni!) (7915 SE Washington). In Montavilla, of course. Music, barbecue, and over 40 beers. The Beer Here has more details. 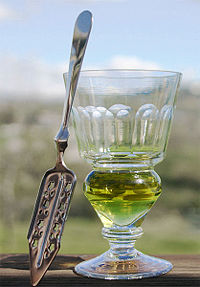 I hope to make it to the seminar Faeries in Your Backyard: Q&A on Northwest Absinthe with Gwydion Stone (founder of Wormwood Society and developer of Marteau Absinthe Superieure) & Rich Phillips (Integrity Spirits).

For a recent exploration of the NW’s nascent interest in absinthe, read Gastronautical Gastronomicon‘s absinthe mania. Modern Drunkard has a good history of absinthe in the article Return of the Green Faerie.

Entry is $10 each day (or $16 for both days) and includes 3 taster tickets. You can buy more tasters for a reasonable price. I think it was $1 last year. Click here for a list of participating distillers, and the spirits they will be sampling. I’m looking forward to the Saffron Vodka from Sub Rosa, and the aged pear brandy from Brandy Peak.