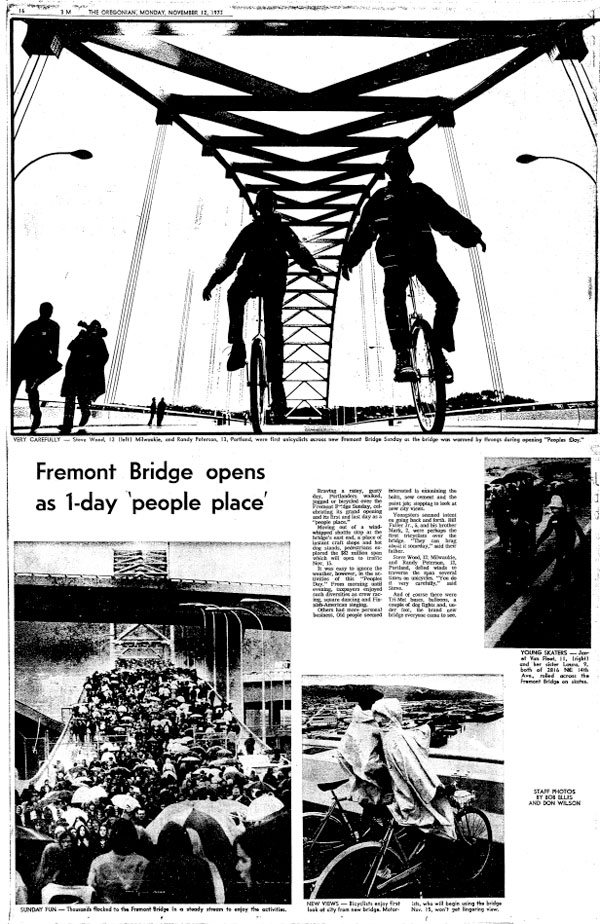 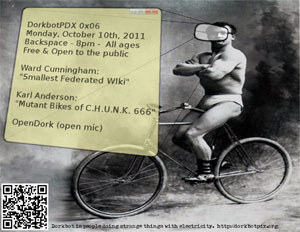 What does this entail? A couple of wonderful and inspiring presentations by a pair of local troublemakers.

The presenters are Ward Cunninghan, of the Smallest Federated Wiki, and Karl Anderson, one of the mad scientists behind the Mutant Bikes of C.H.U.N.K 666.

In addition there will be an OpenDork open-mic session for anyone looking to show off a project, ask a question, solicit help, or incite collaboration.

The show is free, all ages, and starts 8pm.

Over 2000 bacon lovers attended last year’s fest, thoroughly lubricating their cardiovascular system and contributing over 900 pounds of food for the Oregon Food Bank.

The Baconfest features vendors such as Hopworks Urban Brewery, Tim’s Chips, Baconshirts.com, Bakon Vodka, and more. In addition the Timbers Army Truck will be there, and the fine folks of Cascadia.FM.

Entertainment includes live bands and the services of DJ Mel.

Festival goers can compete in The Bacon Toss, The Wacky Bacon Eating Contest, Giant Bacon Twister, The Greasy Bacon Foot Challenge, The Bacon Dance Off, or The Bacon Art Wall for fabulous prizes.

Admission is a mere $5 and a suggested donation of 2 canned food items for the Oregon Food Bank. Must be 21 or over to enter! For more details visit the Baconfest website or the Facebook event page. 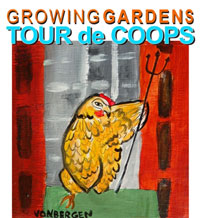 What, you might be asking, is a tour de coops?

This is a fun and affordable community event for you, your whole family and all your friends! Chicken owners throughout Portland will open their yards so you can see their coops and meet their chickens.

The Tour de Coops is a self-guided tour; you’ll have the opportunity to visit 22 backyard chicken coops all over East Portland – getting to know your neighbors while learning and sharing urban chicken keeping ideas.

Purchase a tour booklet (which serves as your ticket) at Garden Fever (3433 NE 24th), Urban Farm Store (2100 SE Belmont), or People’s Coop (3029 SE 21st) from July 8-16 for a mere $15. Visit the Growing Gardens website for more information, including how to enter the raffle to win a coop made by The Garden Coop! 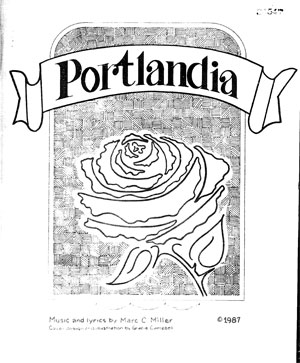 Musician Marc C. Miller had long thought Portland needed a song – a la “New York, New York,” “Chicago is My Kind of Town,” or “I Left My Heart in San Francisco” – but he couldn’t come up with a focus until he saw Portland’s new statue (at the time) – Portlandia.

“I felt like writing about Portland through Portlandia’s eyes” (The Oregonian, 14-February-1987).

Old town, downtown, fountains and lights,
The Willamette reflecting our city at night
From bridges, nightspots in neighborhoods, too.
Together, we grow in love and respect for you.

Hours, days, weeks at a time,
Holiday weekends, time to unwind.
From winter’s reign through summer’s fall,
The lady of seasons belongs to us all.

Gazing upon the busy streets,
Reflecting the mountain’s history
Through her eyes,
She fills me with pride.

After a little lobbying and luck he got Mayor Bud Clark and the other members of the City Council to listen, and on May 3, 1989, with the adoption of resolution 34547, the song “Portlandia” was established as the official Portland City Song.