Thanks to a Taka Suzuki‘s first goal of the season, the Portland Timbers pulled off a come from behind draw at Tampa Bay on Saturday. They return to action tomorrow at Rochester, and then have a week to rest up for Minnesota at PGE Park on Wednesday, August 11th.

But the big news this week is the Timbers U-23. The U-23s qualified for the semifinals by defeating the Kitsap Pumas 2-1 Sunday night, and on Friday and Saturday, August 6 and 7, PGE Park will host the 2010 Premier Development League Championship.

Tickets, good for entry to both matches, are a mere $10 each day. 2011 MLS season ticket holders will receive four complimentary tickets each day of the tournament. Visit PortlandTimbers.com for more details. 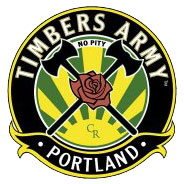 We know you wouldn’t miss this for the world. But you should also know that by purchasing your Timbers Army Season Tickets, you do more than just reserve a place in the North End*: Ticket-buyers will receive discounts from game-day prices, invitations to special events, and commemorative merchandise marking the Rose City’s rise to this country’s top tier of professional soccer.

Speaking of the Timbers Army, you see that kick ass logo above? It was designed by fan Damien Webb, who also just recently designed the new PAC 10 logo. Not too shabby.