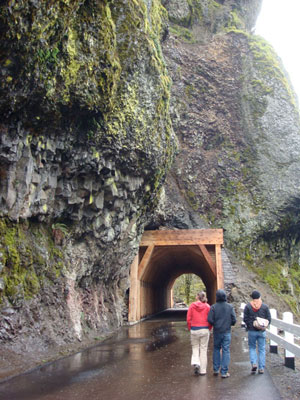 The Oneonta Tunnel is part of the Historic Columbia River Highway, a 74 mile long road connecting the Sandy River near Troutdale to The Dalles. The road was completed in 1922. Two miles east of Multnomah Falls, the tunnel was carved out of the Oneonta Bluff lava rock in 1914.

An impressive feat of engineering tracing a stretch of astounding natural beauty, the Illustrated London News dubbed the new highway the king of the roads.

Cars got faster and trucks got bigger, however, and in the 1930s the highway’s usefulness was diminished. Work began to build a straighter and flatter road, which by 1954 stretched all the way to The Dalles. In 1948 the Oneonta Tunnel was closed and filled with debris.

In 1983 the Columbia River Highway Historic District earned a listing on the National Register of Historic Places. Efforts to preserve and restore sections of the deteriorating road began.

In 2006 work began on restoring the Oneonta Tunnel for pedestrian and bicycle use. The tunnel was cleared of the rocks and the tunnel interior was re-timbered.

Heather and I had the pleasure of visiting the Oneonta Tunnel the following weekend. For our first hand accounts and lots of photos check out Heather’s blog post: Five Hours That Kicked My Ass; and mine: Dave gets out of town: Oneonta Tunnel, Beacon Rock, and Walking Man Brewery.