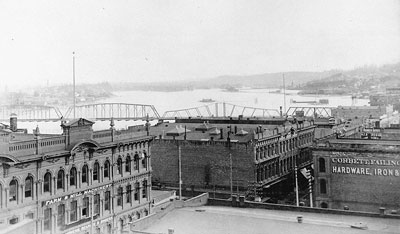 Though the bridge had been completed and accessible for a day or two prior, on April 12, 1887 the first Morrison Street Bridge officially opened with a little celebration that included a procession and free crossings:

This forenoon at 10 o’clock the Morrison street bridge will be opened to the traveling public, all necessary work having been finished. At 10 o’clock sharp the bridge will be opened, and for two hours – until 12 M. – it will be free to all. After the noon hour the collector will commence taking fares. It was the purpose of the company to have the formal opening of the bridge celebrated in some fitting manner appropriate to such an event in the history of Portland. (Morning Oregonian, 04-12-1887)

In an early display of Portland’s patented passive aggressiveness, the article continues:

Some public demonstration was talked of, in which the mayor and members of the common council and other city officials of Portland, should unite with the officers of the municipal government of East Portland; that there would be a procession, music and congratulatory speeches made, and that the event would partake somewhat of the nature of a gala-day. However, as the project did not seem to meet with a very responsive spirit, the matter went by default and it was concluded to quietly open the bridge without any public demonstration.

The full length of the $200,000 bridge was 1650 feet, from the east line of Front street to the west line of Water street, with an 808 foot long iron draw. The movable span, which required about 90 seconds to open and close, was 26 feet high and 40 feet long. The roadway was 25 feet wide with 5 foot wide sidewalks on either side (sorry, no bike lanes). The toll rates were $.05 cents for pedestrians (but you could get 8 tickets for $.25!), $.10 for horsemen, and anywhere from $.15-$.25 for vehicles with sundry additional charges depending on load size and passenger count (Morning Oregonian, 04-07-1887). Built by the Willamette Iron Bridge Company, when it opened the Morrison street bridge was the largest span west of the Mississippi (Insiders’ Guide to Portland, Oregon, page 12).