The bridge opening was a big deal: the mayors of San Francisco, Spokane, Seattle, Tacoma, and the city manager of Sacramento all sent messages of congratulations on the the opening of the bridge, conveyed by carrier pigeons (Morning Oregonian, 28-May-1926).

Construction took about two years and cost about four and half million dollars. The bridge was built by the Pacific Bridge company, the same company that built the first span across the Willamette River in Portland 39 years previously, the first Morrison street bridge. The Burnside is unique in Portland in that it is the only Willamette river crossing designed with the help of an architect:

a result of the early 20th century City Beautiful Movement that called for adding architectural ornamentation to engineering designs. The bridge’s distinctive Italian Renaissance towers reflect the trend. Burnside is eligible for the National Register of Historic Places and protected by preservation laws. Originally designed by the firm of Hedrick and Kremers, Burnside was completed by Gustav Lindenthal (1850-1935). Burnside’s opening mechanism, or bascule, was designed by Joseph Strauss (1870-1938), whose Golden Gate suspension bridge would open 11 years after Burnside.

The city and county put on quite the shindig to celebrate the opening. Three parades took place, one from each side of the river, and one marine parade right down the middle, which passed downstream while the bascules of the bridge were open. The bascules closed and the two terrestrial parades met in the middle of the bridge where the Prohibition era dedicatory services culminated with the breaking of a bottle of Bull Run water at mid-bridge by Dorothy Jane Myers, daughter of District Attorney Myers and Mrs. Myers (Morning Oregonian, 28-May-1926).

The bridge was opened to pedestrians after the program, and on the river the Portland Motorboat club staged a regatta while fireboats ran fire drill maneuvers. The bridge officially opened to vehicular traffic (two street car tracks and four lanes of traffic) at 7 P. M. after an address by Chairman Smith over KGW, The Oregonian radio. 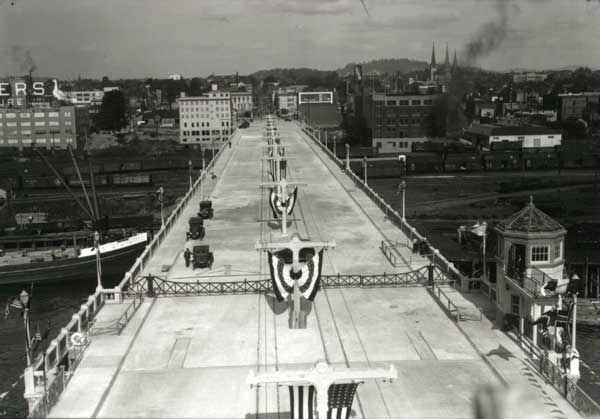 Photo credit: “New Burnside Bridge decked out for opening” from the Office of the City Auditor webpage.