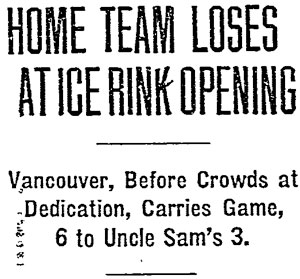 Portland dedicated its new Ice Hippodrome last night to make a Vancouver holiday. The ice has been there for a month and thousands have exercised their squeaky joints, but yesterday was the official opening of the Pacific Coast Hockey League. Mayor Albee was there and faced the puck. About 2000 other society functionaries sat about and wondered what it was all about. In fact, it was a gala occasion in everything but one respect – and that was that Portland did not win.. . .

Perhaps 50 per cent of the crowd had never before witnessed a hockey game, and if there were any doubters they came away thrilled and electrified by the exhibition. Portland’s septet had been practicing only one week and occasionally play slackened, but in the main it was sensational quarrelmonging with the inoffensive bit of vulcanized rubber in the role of ye goat.

The final score was Vancouver 6, Portland 3. The Portland team would only two years later be the first American team to play for the Stanley Cup, which alas, they would also lose.

The Ice Hippodrome was located in Northwest Portland at Marshall, Northrup and Twentieth Streets (Morning Oregonian, 30 September 1913). It was home to the Portland Rosebuds, Portland Buckaroos, Portland Eagles & Portland Penguins until 1963, when it was unceremoniously razed.