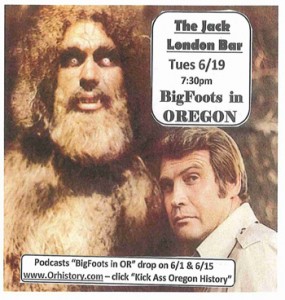 You see, June is BigFoot month at OrHistory.com

“So Sasquatch?” you rightfully ask, respectfully skeptical Ass Kicker. “Do we even know if Bigfoot is real, for realz?” And that is a great question to ask. In fact, we THANK YOU for asking such a question. And the answer to that question is, to quote Brandt, “well Dude, we just don’t know…”

If we dig deeper behind the methodology of the question, we might wonder that if something is not real, let’s say a One Eyed, One Horned, Flying Purple People Eater, then can it really be called “History?” And I, the Resident Historian of this learned site, counter with a resounding… “Maybe…”

We don’t know if there are Bigfoots. We do know that Native Americans in the area have disparate oral traditions of things that might be considered Bigfoot-esque. We also know there have been some crazy big prints found, some difficult to identify scat and hair, and almost innumerable sightings reported. But we don’t have a (thank God) Sasquatch in a cage, a body in the woods, or even a portion of the aforementioned to really examine and prove existence definitively. So in a sense, I feel it is a fair statement to proclaim that we don’t have a real history of this beast to present.

But there is NO disputing that there is a phenomenon that is called “Bigfoot.” Thousands of sightings have taken place of this gentle giant of the woods, and he (or the lactating “shes”) have left their imprint on the legacy of Oregon’s History.