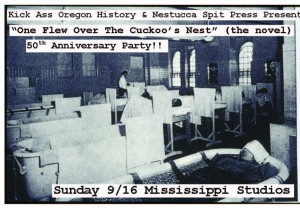 Join the Kick Ass Oregon History crew and the fine folks from Nestucca Spit Press on Sunday, September 16, 2012 as they present the “One Flew Over the Cuckoo’s Nest” 50th Anniversary Party at Mississippi Studios (3939 N. Mississippi) – the celebration begins at 7:30 p.m.

In 1960 or so, Ken Kesey was volunteering to take hallucinogenic, psycho-active drugs while working the night shift at Menlo Park Veterans Hospital. He would talk to the mentally ill, and drop acid, and write. Kesey began to play with themes of sanity and insanity, society and the fringes, The Combine and non-conformity. He set his novel in the Oregon State Hospital in Salem, and the narrator was a Native American from Celilo, who’s life was irreversibly changed with the damming of the Columbia River at The Dalles.

Fifty years ago this novel was published. Oregon is an inseparable component of this selection. So on the eve of what would have been Ken Kesey’s 77th Birthday, we are going to have one big fuckin’ party!

The celebration includes readings from the book, discussions with Matt Love and Doug Kenck-Crispin, live music by the 1939 Ensemble, a trivia contest (with lots of prizes – grand prize is a night stay in the Kesey room at the Sylvia Beach Hotel!), AND to finish off the evening, after everyone has had a share of adult beverages, Matt Love will lead us in a classroom debate worthy of your senior year American Lit class!

Tickets are a mere $8 at the door, and $6 in advance. Find more details about this event, the novel and film, and Oregon’s sordid history when it comes to taking care of the mentally ill at OrHistory.com and at the Nestucca Spit Press website.