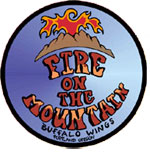 The gist of the article is that restaurants don’t fail as often as one would think because of lack of capital, or poor location, but that restaurant success is largely influenced by the strength of the concept, something Fire on the Mountain’s owners had:

“The more I researched, the more confidence I gained,” says [co-owner Jordan] Busch, who had been kicking around the wings idea since he was a teenager. He already had the whole concept mapped out in his head: It would be someplace with the ambiance of a local sandwich shop rather than a sports bar—someplace where everybody could feel comfortable. There would be a big chalkboard menu, live music, and a rotating gallery of local artists on the walls. Busch says most of these details were things he just had a gut feeling about.

(Though their non-concept bases were well covered too; in my opinion the North Interstate location is great, and the article tells us they had a $100,000 investment to start their business.)