Spring has finally arrived, and with it my favorite part of the year: Festival Season.

That’s what I call it anyway.

By late summer every weekend has beautiful weather and copious cultural and neighborhood festivals.

Lucky for us beer, as it so often does, saves the day:

This is the beer festival I’ve never gone to. The reason I’ve never gone is that it’s held at the Oregon Convention Center. (Whichever door and 1/2 mile long hall you pick when entering the behemoth, you always end up at the wrong end first; and may nearly enter a golf show before you locate your intended destination. Better signage would be helpful.) But this year I might give it a shot. Mainly because I’m intrigued by the concept of a tour de Cheese and the Island Times fest special from 3-5pm Saturday.

But earlier in the day I hope to make it up to Hawthorne. The Pacific Northwest Cheese Project informs us that from 1-4pm Pastaworks is hosting several Oregon artisan cheese makers, with samples! 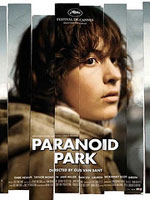 And if beer and cheese isn’t enough for you, Paranoid Park opens at Cinema 21 Friday and runs through the 27th. I usually wait until Netflix, but this is one movie I will make sure to see in the theater. Portland may appear in top 10 lists and the New York Times every day, but not on the silver screen.

A must-read from Mad About Movies for Gus Van Sant, and Portland, fans: Gus Is Us: A Filmmaker and His City