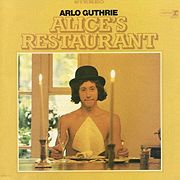 Yesterday Feministing and Matthew Yglesias asked the more general questions “what is the first concert you ever went to?”, which elicited numerous cool and a multitude of embarrassing and amusing answers.

I figured this would be a good question to steal borrow for my blog, but since my blog is about Portland, I’ll ask:

What is the first concert you ever went to in Portland?

Back in 1987 I saw Arlo Guthrie perform at the seminal, though now defunct, Pine Street Theatre. The version of Alice’s Restaurant he sang at that show included snarky verses about the Iran Contra scandal.

Throughout high school I saw several shows at the Pine Street, and then later at the legendary X-Ray Cafe (most notably my friend Ryan’s band Hog Wild).

(I guess readers who have never been to Portland or have never seen a show in Portland can share their first concert ever.)