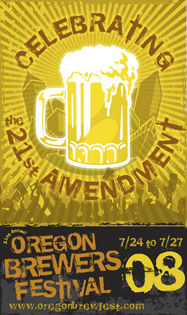 The Big One starts today.

In years past I’ve been more excited about this festival than any others. Times change. The Organic Brewers Festival has been my favorite the past few years. The Big One keeps getting bigger, and more crowded, and the good beers run out too damn early. I don’t have the energy this year to get to Waterfront Park at noon today, so I probably won’t bother at all. Unless you get there early and drink your tiny samples quickly, you’ll spend more time in lines than enjoying beer.

But that doesn’t stop me from wistfully perusing the list of beers. If I were heading to Waterfront Park this weekend, I’d be all over Flying Fish Brewing Company‘s Love Fish Abbey Dubbel, and Belgian Style anything.

In 1933 the 21st Amendment to the United States Constitution repealed the 18th Amendment, which had mandated nationwide Prohibition. Since the Oregon Brewers Festival turns 21 this year, the event finds it fitting to celebrate the ratification of the 21st Amendment during its four-day course. One of the nation’s longest-running and best-loved craft beer festivals will take place July 24 through July 27 at Tom McCall Waterfront Park in downtown Portland. Hours will be Noon to 9 p.m. Thursday through Saturday, and Noon to 7 p.m. Sunday.