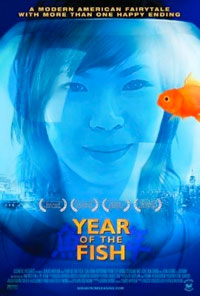 Year of the Fish is a modern adaptation of the Cinderella story set in New York City’s Chinatown. Cinderella is young émigré Ye Xian. She has come to America seeking a job so she can send money back to her sick father in China. Mrs. Su, a distant relative, takes her in with the promise of employment. The employment turns out to be indentured servitude in a massage parlor; Mrs. Su is this story’s Evil Stepmother. When Ye Xian refuses to give customers the requisite “happy ending” she is forced to be the massage parlor’s scullery maid and janitor. Prince Charming is a young man named Johnny who plays the accordion in a hipster jazz band.

The Cinderella story most of us are familiar with largely shapes the film, but there are a few twists.  Some elements come from Ye Xian, an earlier Chinese version of the story.  Others from the Slavic folktales about Baba Yaga.

The film is “animated” in that the live action video was gone over with a rotoscope-style digital painting process. The result is water-colorish. At times the effect is stunning and beautiful: in close-ups of actors’ faces, impressionistic shots of the city streets, the parks, a fountain. But mostly I found it distracting and obfuscating. I expected a transition to live action at some crucial point, a la Wizard of Oz‘s black and white to color, but that was not in the filmmakers’ plan. Like with subtitles, however, after a few minutes I almost forgot about it . . . until it became distracting again.

Some plot revelations late in the film make one wonder why there was no inkling earlier (script? editing? time constraints?). Chinatown, when it appears, is one of the most interesting characters in the film, but the depressing confines of the massage parlor get much more air time. Some of the clichés seem heavy handed, even allowing for a fairy tale’s lack of nuance.

Randall Duk Kim, who plays three characters in the film, performs each with gusto (his performance reminds me of Jeremy Irons‘ in Dungeons and Dragons. Seriously. Shitty movie, but you cannot tell me he is not having a fantastic time). I also enjoyed the performance of Tsai Chin, as the acerbic Mrs. Su. An Nguyen and Ken Leung, as the Cinderella and Prince Charming, respectively, give good, if somewhat wide-eyed, performances.

But the highlight of the film for me was the accordion music (written and performed by Ted Reichman).

Year of the Fish premieres in Portland Friday at the Hollywood Theatre.