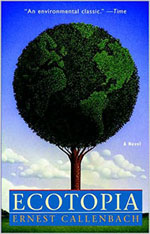 The Novel that Predicted Portland

That’s the headline of an article in the New York Times today that equates modern day Portland with the utopian locale in the 70s era environmentalist-Utopian novel Ecotopia by Ernest Callenbach.

The novel, now being rediscovered, speaks to our ecological present: in the flush of a financial crisis, the Pacific Northwest secedes from the United States, and its citizens establish a sustainable economy, a cross between Scandinavian socialism and Northern California back-to-the-landism, with the custom — years before the environmental writer Michael Pollan began his campaign — to eat local.

Other than the headline the only actual reference to Portland comes as part of the answer to the question “So what has “Ecotopia” given us?”

A great deal, thinks Professor Slovic of the University of Nevada, including the bioregionalism movement, which considers each part of the country as having a distinct ecological character to be cultivated. The green movement’s focus on local foods and products, and its emphasis on energy reduction also have roots in “Ecotopia,” he said. In fact, much of Portland, Ore., with its public transport, slow-growth planning and eat-local restaurants, can seem like Ecotopia made reality.

Read the whole article for a well measured analysis of the impact, and steadily growing popularity, of this rather obscure, originally self-published novel.

Where to find the book: Library | Powell’s