In 1998 I bought a house, a tiny shack in Felony Flats built in 1906, but with a couple craftsmen-gothic additions. It had crooked floors, virtually no insulation, and the nastiest carpets in the universe. It was, however, surrounded by a sizable yard; the house itself took up a small fraction of the 4800 square-foot lot. 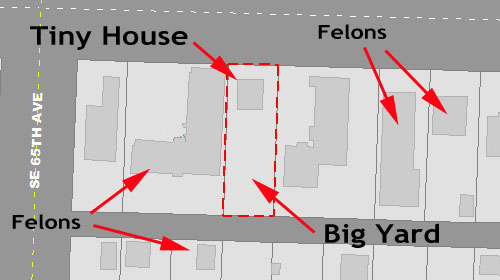 I grew up in the suburbs with hay fever, so naturally I developed an aversion to yard work. When I bought the house I was in my 20s, barely prepared for adulthood, much less the responsibility of home ownership and leaf raking. I hosted some legendary parties with no need to worry about a security deposit, but other than that there was nothing I particularly liked about “home ownership” (If you’re paying a mortgage you don’t actually own your home; the bank has the deed after all). I longed for the freedom to travel, relocate, and in general make plans for the future that didn’t require coming up with a mortgage payment every month for the next 30 years. And of course the yard became a jungle. I sold the house a few years later, before the ownership society real-estate bubble really took off, so the profit was just enough to pay off my student loans and a credit card; i.e. get back to zero.

I’ve been renting ever since. The rents I’ve paid have all been well under what a mortgage would cost for the same property. I’ve saved a fortune on utilities by living in apartments and condos. I moved to Hawaii and back. I’ve contemplated moving to Canada or Ireland. I’ve traveled. I’ve changed careers four times. I’ve lived in 5 different places, each with its own charms, in five different neighborhoods in three of Portland’s five “quadrants.” I’ve been able to do all the things I couldn’t do when I had the albatross of a mortgage to worry about.

But now I’m in my thirties and contemplating a yard brings on not just sneezing fits and eye irritation, but also cravings for garden-ripened tomatoes, strawberries, and sweet peas.

If I had a yard now I would plant a garden, and maybe even look into the whole chicken thing. I used to live a few blocks from Pistils Nursery on Mississippi, where bantams range freely amongst the ornamentals and edibles out back. Inside new arrivals chirp and stumble in the wood chips under heat lamps.

Chicks on Mississippi from Dave Knows on Vimeo – Filmed by Heather of Mile73.com.