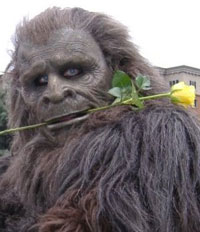 Valentine’s Day is also the anniversary of Oregon’s admission into the union.

Celebrations of Oregon’s 150th Birthday are taking place throughout the state. In Portland the Oregon Historical Society is offering free admission all weekend, the library is hosting sundry events, and the Architectural Heritage Center has put together a program illustrating 150 years of Portland architecture. (Around the Sun has assembled a list of free events this weekend, including these and more.)

But the big events are the first annual Best Pierogi Competition at Krakow Koffeehouse and Cafe (3990 N Interstate) Saturday at 12:30pm, which I wrote about yesterday, and the Oregon Brewers Guild sponsored Zwickelmania.

What the heck is Zwickelmania?

This President’s Day weekend, dozens of Oregon breweries and brewpubs will open their doors to visitors for the state’s first annual Zwickelmania, a one day event similar to the open houses held by Oregon wineries over Memorial Day and Thanksgiving weekends.

Zwickelmania, hosted by the Oregon Brewers Guild (OBG), is a free statewide event that offers visitors a chance to tour Oregon breweries, meet the brewers and sample their favorite beers – all during Oregon’s Sesquicentennial weekend.

What the heck is a Zwickel? Chad Kennedy from Laurelwood Brewing, beer in hand, explains:

My sweetheart and I are going to have a fantastic weekend.

But there’s no excuse not to have a fantastic weekend this year, even if you don’t have a sweetheart.