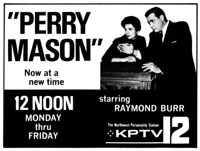 Music affected me more powerfully as a child. The theme to M*A*S*H, for example, depressed me; I was not surprised years later to learn the piece is called Suicide is Painless. The intro music to Perry Mason also had a powerful effect – it filled me with dread. But still, I have pleasant memories of watching Perry Mason while sipping 7 Up and nibbling saltines (my mom’s remedy for tummy aches) on childhood sick days. Mom usually folded clothes beside me, in my vague memories at least. The intro music to Perry Mason, as well as 7 Up and saltines, function upon me like Proust’s petite madeleines dipped in tea.*

Until I read this article, however, I had no idea this may be a particularly Portland memory. Except for 10 months in 1974-75 when it started a half hour later, Perry Mason has been shown on channel 12 at noon every weekday since 1970 – the year before I was born.

Most Portlanders knew exactly what this blog post was about when they read the headline.