Last week, as you know, I learned about two very cool Portland things: a NE Portland brewpub speakeasy, and that in 1953 a huge ski jump was erected in Civic Stadium.

This past weekend I was in the NW corner of our fine state and I learned something else that I thought was very cool – Cable Television was invented in Astoria, Oregon.* In 1948 a man named Leroy E. “Ed” Parsons raised an antenna above the Astoria Hotel to pick up the signal from the new Seattle television station KRSK (now KING). He connected coaxial cable and ran it across the street to his apartment – et voila, cable television! Eventually he helped others in town hook up, for a fee, to the cable. A plaque sits at the site of the Astoria Column to commemorate Parsons’ ingenuity and contribution to Astoria. 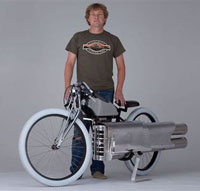 Maddox, 48, who has been tinkering with pulse jet engines for 10 years now, recently decided to bolt twin engines to an old-school cruiser bicycle and take it for a 73 mph test drive … er, ride on a remote southern Oregon highway.

Read the rest, and watch the video: It’s not a rocket, officer, it’s a jet bicycle.

* There are other claims to the first cable system too; I think Leroy E. “Ed” Parsons is credited though with the first coaxial cable, amplifier, and community antenna system.