Of course the North American Organic Brewers Festival will be at Overlook Park all weekend long. I’m heading up there immediately after work on Friday – it’s my favorite summer beer festival. 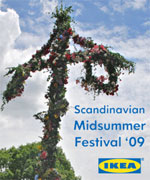 Saturday celebrate the summer solstice (a week late) at the 81st annual Scandinavian Midsummer Festival with the Scandinavian Heritage Foundation and The League of Swedish Societies. The details:

I’ve never been to this festival, but we had so much fun last weekend at the Astoria Scandinavian Midsummer Festival, I’m hoping to be able to check it out. There is a beer garden, after all!

Sunday the Timbers face the Montreal Impact at PGE park. The kick off is at 5pm.

Earlier in the day, at 1pm, the Portland Timbers U-23’s take on the Vancouver Whitecaps Residency at PGE Park. Come to that match, then cross 18th for the bbq and tailgate at the parking lot between SW Taylor and SW Salmon on 18th Ave (behind Cheerful Bullpen). Several Timbers players will be making some appearances to hang out with the fans. For more information check out this thread.