What do the Village Square in Whistler, the Piazza Navona in Rome, Marienplatz in Munich, and Paris’ Place de L’Hotel de Ville and Palais Royal all have in common? They are all successful urban plazas. Gordon Price, a Canadian transportation and urban planning expert, notes in his blog that they all also share another particular: their widths are about 50 meters.

So what’s so special about 50 metres, plus or minus a metre or so? Obviously, it creates a comfortable sense of enclosure, while both working at the individual scale and still accommodating large crowds.

Yep. Even though the square fills in one of the city’s famous 200-foot-square blocks, the actual space used for performance and display occupies just over 50 metres on the diagonal. 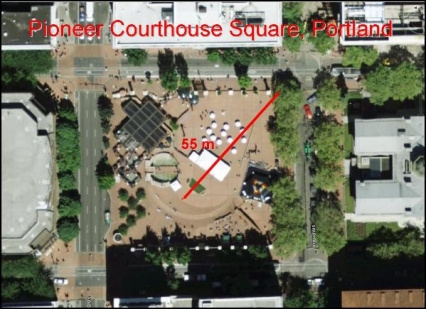 I’ve lost my zeal for the Oregon Brewers Festival (perhaps next year I’ll take the Thursday off and go right at noon, before the hoards descend).

So this past weekend Heather and I got out of town. We’ve nearly exhausted the close-to-town campgrounds on the Oregon side of the river, so we decided to head north. North and east, to a small campground a few miles off Washington Highway 14 between Stevenson and Bingen called Moss Creek. We didn’t know much about it, as descriptions on the internet are scarce and it’s not mentioned in our one Washington camping book, but they take reservations so that decided us. 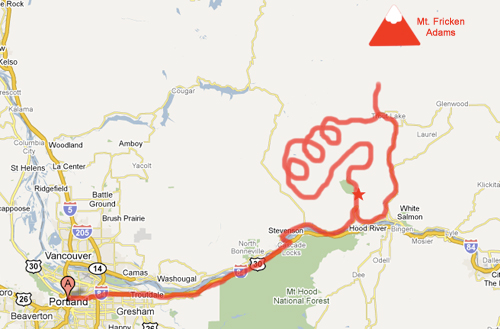 Though not the best campground we’ve stayed at, Moss Creek proved convenient to exploring The Gorge, Mount Adams, the Big Lava Bed, and other sights. We experienced fantastic weather for the first time in our half dozen or so camping trips together, and we branched out in our camp cookery: we baked biscuits and rolls on the campfire; and I can now unequivocally state that one thing our previous camping experiences lacked was fresh baked bread!

As usual Heather has blogged our latest adventure, with map (stolen above), photos and a deft sense of humor, at Mile73:

If you like beer and soccer, the weekend starts on Thursday this week.*

The parade starts at the Harborside Pilsner Room (0309 SW Montgomery), winds its way downtown (stopping by City Hall to pick up Mayor Sam Adams), and by about noon arrives at the tents on the waterfront. The mayor will tap the ceremonial first keg and the 2009 Oregon Brewers Festival will have officially begun. Anyone can participate in the parade, and you’ll be glad to know the organizers got a street permit from the City of Portland – no tear gas and paddy wagons this year!**

As you know, the Brewers Festival runs through Sunday.

At 7pm Thursday the Timbers battle the Puerto Rico Islanders for first place at PGE Park, which you also know. And I don’t even have to remind you about the friendly Saturday against the visitors from England – Burnley FC of the English Premier League (well, beginning next season). 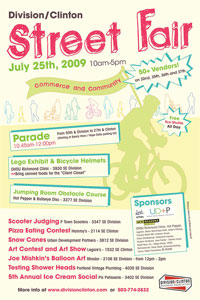 Saturday head out to Southeast Portland for the Division/Clinton Streetfair and Parade. The fair starts at 10am, the parade at 10:45. The parade route extends from 50th and Division to 27th and Clinton.

Again this year the festival highlight is Hammy’s Pizza Eating Contest!!! Actually last year I missed the contest, but it is no doubt a highlight. It starts at 1pm at 21st and Clinton – contact Hammy’s for information on how to participate.

A free shuttle serves the festival area, there’s a lego exhibit, lots of bbq, and an ice cream social. On the Division/Clinton Business Association website the list of the activities is only available as an Excel document. I’m making it available as a PDF for your (slightly more) convenience.

* If you don’t like beer and soccer, you probably also don’t like rain, bikes, public transit, smiles, and unicorns. Sad, really.

** It’s a joke! No riot police were necessary at previous Brewers Parades.

The Mighty Mighty Timbers recently returned from a successful road trip to South Florida, where they not only drew with and then beat Miami FC in two matches in three days, but also tied and then surpassed the USL division 1 record for consecutive matches in a season without a loss – that’s 16 matches in a row for the Timbers; their only USL 1 loss this season was to Vancouver in the season opener on the road.

Thursday’s match is big: the visitors are the Puerto Rico Islanders, who currently sit tied with the Timbers at the top of the standings. The Timbers play Thursday not only to defend the home field, but also to extend their unbeaten streak to 17 games. With a win they can stake claim to sole possession of first place.

Saturday the Timbers return to the PGE pitch to take on Burnley FC, who are on a preseason US tour. One of the founding members of the Football League, Burnley have been absent from the top echelon of English football for 33 years, but next season they play in the English Premiere League, having earned promotion last season. 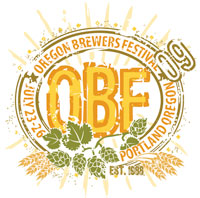 It’s that time of the year again – the last full weekend in July. The weekend for beer loving hoards to descend upon Waterfront Park, stand in lines for hours, and sweat as temperatures push the triple digits. Oh yeah, occasionally a teasing gulp or two of beer is sloshed into your $6 plastic cup – time to get in line again. It’s the 22nd annual Oregon Brewers Festival!

My advice is to arrive early, try the unique beers not normally available in Portland, and then leave early and make your way to one of the many bars and taverns around town with fantastic beers and 16-20 ounce pints. For the second year in a row, I will miss the brewers festival, but I am not too disappointed; I’ll drink good beer this weekend – we’re camping up near Mount Adams, so there’s a good chance we’ll be able to swing by Walking Man Brewing in Stevenson, Washington on the way home Sunday.

The festival runs Thursday through Sunday, July 23rd-26th. Taps open at noon each day and close at 9pm (7pm on Sunday). Over 80 beers will be available for sampling.