The streets were eerily empty at 9:30am when Heather and I left the house. In the cool silence we rode to SE Lincoln to join the pedestrians and cyclists taking part in the final Sunday Parkway of 2009. Last year Heather and I walked the inaugural Sunday Parkway in North Portland, and it was packed. Maybe the lack of publicity was having an effect on attendance? After a brief ride we stopped at Colonel Summers Park for some cold-brewed coffee from Café Vélo and a slice of blueberry lemon cake and a plum vanilla bean muffin from Dovetail Bakery. While we enjoyed our breakfast we noticed the crowd in the park and the bicycle traffic on the street growing rapidly; we stopped worrying about whether the word had gotten out about the Sunday Parkway.

After checking out the booths and taking a few photos we hopped back on our bikes and joined the stream. Just a few blocks down the road we chanced upon our friends Jay and Courtney, who were also taking advantage of the Sunday Parkway. Mr. Big, their long-haired dachshund also joined in the fun, and proved to have surprising stamina.

Our next stop was Laurelhurst Park. We took a gander at the Bixi bikes. Bixi supplies the bikes and system for Montreal’s public bike sharing program, and soon will provide the same service for Boston and London. Maybe someday Portland too – Bixi is one of the vendor candidates for the city’s tentatively planned bike sharing program.

Because my bike only has one gear (and because I am a weakling) we did not continue onto the other loop, which scaled Mount Tabor. We bid adieu to Jay, Courtney, and Mr. Big and headed home.

After a brief rest and a glass of water, we went out again, this time on foot, to check out the Hawthorne Street Fair.

The Hawthorne Street Fair does not really compare to the Mississippi, Alberta, or Multnomah Village street fairs for one major reason: the street is not closed. There was more pedestrian traffic on Hawthorne today than most summer Sundays, but not really by that much. Far fewer vendors hawked their wares than at some of the other street fairs, and constant car traffic does not enhance the pedestrian experience. We did see a few interesting things though.

And we got to try a sample of the Pie Spot‘s excellent chocolate macadamia nut pie. 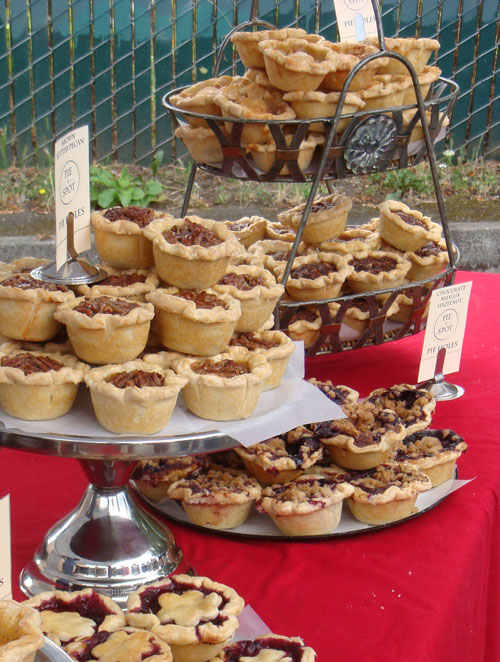 My other gripe with the Hawthorne Street Fair is no beer garden. What self respecting Portland street fair doesn’t have a beer garden? We had to stop at the Bridgeport Pub to ponder this unfortunate situation, over a couple beers.

Ultimately we had a good time though, even if the festivities were not too out of the ordinary for Hawthorne Boulevard.

Photo credits: I took a few, but Heather took most of these!