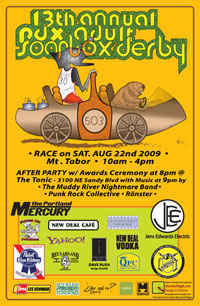 Rise bright and early Saturday morning and head up to Mount Tabor for the 2009 Portland Adult Soap Box Derby.

The races begin at 10am, and should complete around 4pm. Gah, I will be out of town much of Saturday, but if I were in town I would be up on Mount Tabor, in one of the designated viewing areas (see map – pdf), watching the races.

In the evening participants and fans are invited to the Tonic Lounge (3100 NE Sandy) for the after party. Awards will be handed out at 8pm, and at 9pm the music starts. The lineup: Muddy River Nightmare Band, Rönster, and Punk Rock Collective.

Also Saturday, August 22nd, just the other side of Mount Tabor, the Montavilla Neighborhood Association and Thatcher’s Pub are hosting the 5th annual Montavilla Brewfest.

Come out to the parking lot behind Thatcher’s (7915 S.E. Washington) from noon until 9pm for Andre’s Texas Style Barbeque, live music, and over 40 different beers from over 20 local breweries.

And a summer weekend would not be complete without a Timbers game. Last weekend the team beat Montreal 1-0 and dismantled Rochester 4-1, both on the road. They return home with the unbeaten streak still growing at 22, and they also sport a four game winning streak. Saturday they take on the Miami FC Blues at 7pm at PGE Park. Tailgate starts at 4pm.

And for the pinball players, all weekend long, the Showdown at Slabtown pinball tournament takes place at Slabtown, naturally. More details here.