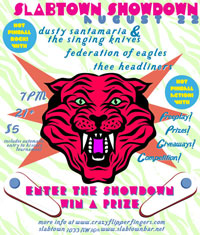 Think you can play pinball? Put your skills to the test this weekend at at the Showdown at Slabtown.

In my younger days I was a pretty decent player, but my little brother, Steve, was a master. We both used to play in the late-90s era Portland Pinball League at the now defunct Jockey Club on Killingsworth. Back then the league was run by Brinda and Sam. Now Brinda and Sam run a bar, Slabtown (1033 NW 16th Ave), and once you’re hooked on pinball, you can’t give it up. Local pinball gang Crazy Flipper Fingers and Slabtown are hosting the Showdown. Grand prize is a Lethal Weapon 3 pinball machine!

For information on how to participate, and entertainment during the tournament, visit the Crazy Flipper Fingers and Slabtown websites.