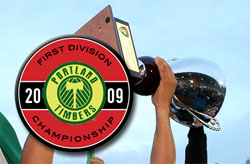 The Portland Timbers have had quite a year.

The record for longest USL First Division unbeaten streak, at 24 games, was set by the Timbers this year, and a new club attendance record has been achieved with a match remaining. And in 2009 two trophies have been added to a historically sparse trophy case: the Cascadia and Commissioners Cups.

So despite the recent slump, this year’s team is the most successful Timbers USL team ever.

Thirsty Thursday, September 17th the Timbers play their final regular season match of the year, against the Cleveland City Stars. See you at PGE Park. Match starts at 7:15pm.

Pre-match meet up with Timbers supporters at the Cheerful Bullpen (1730 SW Taylor) or the Bitter End (1981 W Burnside) to enjoy a few pints and practice your chants.

And get your playoff tickets soon – they may sell out!