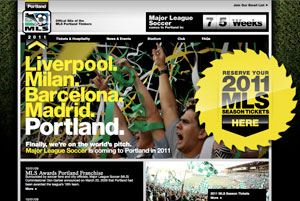 PortlandMLS2011.com, The Official Site of the MLS Portland Timbers was launched yesterday. The site looks pretty slick – get a load of that golden buzz saw blade, and the animated countdown graphic! – but there’s not much content yet.

The unveiling of the new site coincides with the launch of Phase II of MLS 2011 ticket deposits. If you really want to attend matches come 2011, I strongly recommend putting down your deposit now (I’m speaking as a long time fan, not a shill). Portland has a tradition of strong support for soccer and the Timbers dating back to the NASL days. If Toronto’s recent MLS launch is any indication, the Portland MLS club will be selling out PGE Park for years to come.