The message Are You Good Without God? Millions Are. will be appearing on ten TriMet buses for at least the next month. 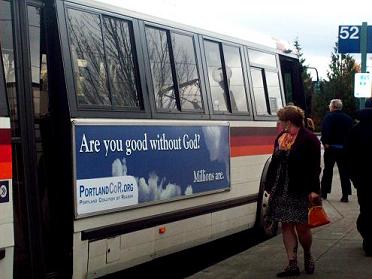 Something tells me this campaign won’t be as controversial in Portland as in some other cities.

The Portland Area Coalition of Reason, with help from the national group, United Coalition of Reason, has purchased ad space on 10 buses in Portland. Similar ads will also be appearing on transit vehicles in New York City, Philadelphia, and Boston, and on billboards in Chicago, Newark, San Diego, and three cities in Ohio.

The campaign is coordinated with the release of the book Good Without God: What a Billion Nonreligious People Do Believe by Greg Epstein, the humanist chaplain at Harvard University. (He will be speaking about the book at Reed College on Thursday, November 19th.)

The Portland Coalition of Reason is a collection of non-theist groups in the Portland area, all of which are comfortable with people expressing skepticism, atheism, humanism, freethought, or other similar views, and exploring issues of the day based on reason and critical thought rather than religious dogma.

Hat tip to the Friendly Atheist