Three recent articles from around the web about Portland run the gamut from interesting and informative to weird and wrong, with one about bicycling, of course.

Lydia Pierce, a former Dallasite who recently moved to Portland, answers a few questions for BFOC regarding the differences between pedaling in the “worst city for bicycling” vs. the “bike friendliest” city in the nation.

Next, an excellent article about Portland food – home cooked to food carts:

We recently took a food field trip to one of America’s great food cities: Portland, Oregon. Portland is a young city where everyone I met except one person is from somewhere else but no one plans on leaving anytime soon. With the great restaurants and breweries, close access to the mountains and wine country, and an overall friendly, laid back lifestyle, who can blame them?

And finally, a hastily thrown together travel piece, of which we’ve seen plenty the past few years. 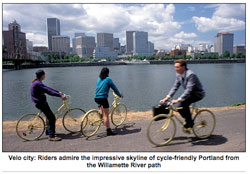 US city breaks: Six things you must do in… Portland at The Daily Mail

What makes this one particularly amusing isn’t the boilerplate Portland cliches (e.g. eco-pioneers, bicycle rides, and Powell’s), but rather the accompanying photographs. There are only two, and they’re both just wrong (and reproduced to the right). 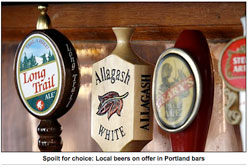 First, there’s the photo with the caption Velo city: Riders admire the impressive skyline of cycle-friendly Portland from the Willamette River path. What is pictured? A fairly standard Portland skyline shot from the east bank of the Willamette near the Hawthorne Bridge. The photo, however is old. Pre-Esplanade, old. The three bike riders in the photo are mounted on the infamous yellow bikes – circa 1994!

The second photo isn’t quite as amusing, but it too is just wrong. Caption: Spoilt for choice: Local beers on offer in Portland bars. Nice sentiment, but the beers in the photo? Long Trail Ale, Geary’s Ale, Stella Artois (none of which are Portland beers), and Allagash White – which actually is a Portland beer: Portland, Maine that is.