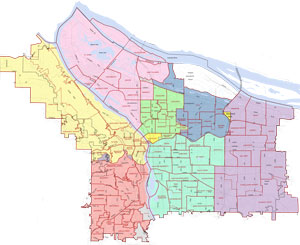 What’s the best thing about your neighborhood?*

The list is roughly in chronological order. Between the two residencies in the Mt. Scott neighborhood I lived in Hawaii for a year and eight months, but otherwise I’ve lived in the Portland area my entire life, and over half of that in Portland proper; mostly inner Southeast, with a bit of North and Southwest to spice things up.

I’m on my second stint in the Boise neighborhood right now, and of all the neighborhoods I’ve lived in, it’s the best fit for me. I like to walk. I’m car-free, and I generally eschew the bicycle. Boise is one of the most compact and walkable neighborhoods in town. North Williams (Vendetta and Dalo’s Kitchen!) is only a few blocks from my apartment. The main business district, North Mississippi Avenue from Fremont to Skidmore, extends a mere five blocks, and is at my doorstep. Within that five block I have almost everything I could ask for (cafes, bars, restaurants, and a bottle shop!), with the notable exception of a grocery store (Pastaworks and the Nu Rite Way Market don’t count). But a New Seasons and a Fred Meyers are not too far away, right along the Yellow Line. Both are also easy to get to by bike, since there are no major hills to contend with. Downtown is a mere three miles away, so I can walk to work, but I also have both bus and MAX transit options within a few blocks (though lately I’ve been carpooling with my girlfriend).

But I’ve liked elements of all the neighborhoods I’ve lived in (otherwise I wouldn’t have chosen to live there).

I especially liked the Goose Hollow and Downtown neighborhoods for their proximity to everything, and the central transit location. It was just as easy to visit my friends in West Moreland as it was to head up to North Portland. I enjoyed being able to go home for lunch to take a nap. And being able to stumble home from Timbers’ matches is something I will sorely miss this summer.

The Mount Scott neighborhood has surprisingly good transit (the frequent service 14 runs on Foster at its northern edge), and is close to the Woodstock area, which is where I had a lot of friends in the early post-college years. I miss the Lutz Tavern something fierce sometimes.

I lived in the Buckman neighborhood before the East Burnside and NE 28th street renaissances, but it was in my immediate college days when I worked at a laundromat, so I had no money anyway. The Food Valu on Burnside (now a New Seasons Whole Foods [thanks Lucas!]) had forgotten to take Kraft Macaroni and Cheese off the sale price (3/$.99!), so I survived on that for months. Another great neighborhood for transit, it was a great home base.

The one thing all of these neighborhoods have in common is proximity to decent transit; a requirement for me. I’ve explored and enjoyed lots of other neighborhoods, notably St. Johns, Montavilla, and Multnomah Village (where I’ll be going on a local-guided pub crawl soon!), but I don’t think I’d want to live in any of them since on foot or by transit they’re so far from where I generally work and play.

Transit, bars, and restaurants are important to me. For you is it the schools, architecture, your neighbors, your house?

What’s your favorite thing about your neighborhood?

* If you’re not entirely certain what neighborhood you’re in, it’s easy to find out at Portland Maps – just enter your address, and in the upper left it will show you. Portland’s Office of Neighborhood Involvement also has citywide and individual neighborhood maps, and information about all the neighborhood associations.

Neighborhood Notes is a great event and news source, searchable by neighborhood. And the Portland Neighborhood Guide is a useful resource for getting your bearings, especially for newcomers.