In a part of town mostly known (to me) for its lack of sidewalks, confusingly meandering roads, and John’s Market, Multnomah Village is a mini urban gem.

Friends that live in the neighborhood had been pestering me to do a pub crawl with them for aeons (apparently spending two hours at the Multnomah Days festival on a busy summer weekend doesn’t cut it). They far more frequently make the journey across town to hang out with us, and we all had a free Friday, so I acquiesced.

First though, I had to figure out how to get there. My TriMet knowledge is legion, but my Achilles’ heel is Southwest Portland. Finally, with some help from the Multnomah Village friends, I figured out I had several options, including the old reliable 44 (better known to me and huge swaths of Portland as the 44 Mocks Crest; but after downtown it goes out to the wilds of Southwest Portland – who knew!?).

So I arrived in Multnomah Village a little after 4pm last Friday. Having got off several stops too soon, I walked down Capitol Highway from 32nd into the little town (on real sidewalks, so my new kicks didn’t get dirty!) and eventually found my way to our first stop (follow along at UrbanDrinks.com, where I created A Multnomah Village Pub Crawl) . . . 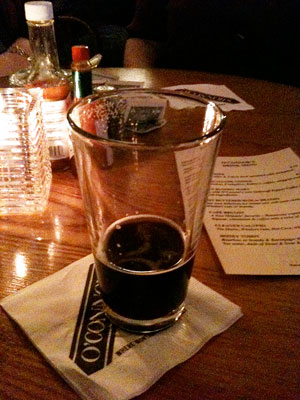 This place takes up three red brick storefronts on the main strip, and bills itself as the place “Where Montana People meet the rest of the world.” (I’m not kidding, that’s quoted from the website – O’Connor’s has an entertaining history.)

And they have an excellent happy hour.

Amy, Diane, and Karen were already there when I arrived, sitting at a little round table. Every other table and almost all the bar stools were occupied. O’Connor’s is a popular place.

I ordered a pint of Black Butte Porter for the bargain price of $3.50. The beer selection is fairly standard, if this were 1998. But there’s a full bar, and wine.

We caught up, and waited for more friends to arrive. The happy hour menu was tempting (Beer-Battered Cod — $3.25), but I didn’t want to fill up on food – the night was young! 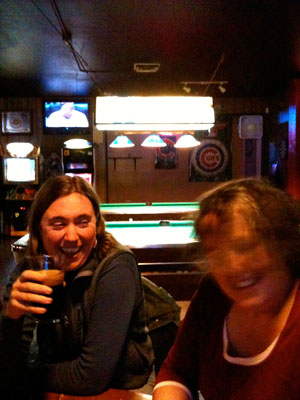 The Ship wasn’t our planned second stop, but Renner’s was filled to the gills with patrons, including Darcelle XV in full regalia, celebrating someone’s birthday. We would be back later when there was room to sit . . .

The Ship is my kind of place. If you’ve ever been to the Lutz, Yukon, or the Bullpen (pre-Cheerful takeover) you know what it’s like. Unpretentious to the nth degree and no doubt very smoky pre-2009.

The kind of place where if you order food they kinda look at you funny, and maybe even recommend trying someplace else.

Not to be dissuaded however, we ordered two baskets of pretzels and a bowl of peanuts to accompany our pitchers of Bison Brewing’s Chocolate Stout, and Cascade’s Dark Day IPA. By now our party had grown to 8. Fortunately the Ship has larger tables than O’Connor’s.

Here’s the review of The Ship I posted on UrbanDrinks.com

I think that sums it up fairly well.

Some of our party were feeling a wee bit peckish, and our planned next stop, Journeys (7771 SW Capitol Hwy), was too crowded (maybe next time!), so we stopped in at Acapulco’s Southwest Gold. It’s a restaurant, but they do have a full bar.

The table ordered a pitcher of sangria, and various margaritas to accompany the chips and (overly sweet) salsa, and a spattering of menu items. I ordered the deep fried jalapeño for a mere $1.95, and it was awesome. 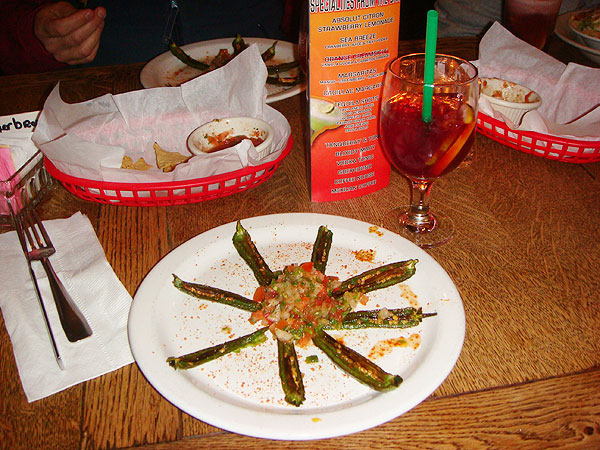 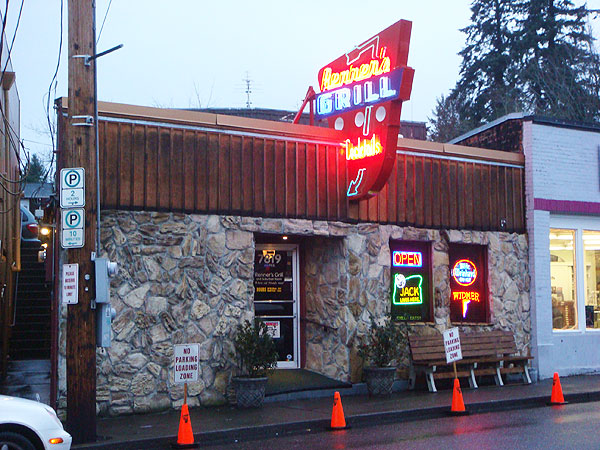 I don’t have much to say about Renner’s, except it’s worth checking out for its vintage charm (I mean seriously, check out that neon sign!). I drank half a pint of Pabst there before rushing up to meet Heather (she’d just arrived from the airport with her friend Kelli, visiting from California) at our next stop . . . 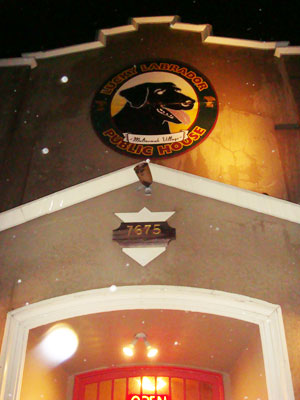 By now we had a huge group, so we ascended the stairs to find enough tables to contain us in the meeting hall. The pizza’s okay and by now I was famished, so I ordered a slice. You’re probably familiar with the beers, as the Lucky Lab empire has bases in Southeast, Northwest, and of course the old Freemason building in Multnomah Village in Southwest Portland. I like their beers alright. I don’t remember which ones I ordered though. One was reddish and the other was golden.

Whew, what a night. I’d like to thank Amy and Diane, the two denizens of Multnomah Village that instigated this whole affair, for inviting us out to their neck of the woods (literally – trees everywhere!) and for opening my eyes to the glories of Multnomah Village. The density and variety of drinking establishments is surprising. I can see why they like it there!