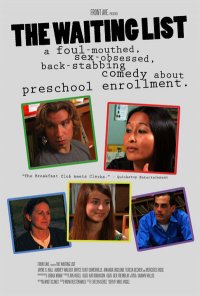 This is the first feature film from Portlander (and friend of the blog) Mike Vogel. He made the film for less than $1500 over three weekends at an elementary school where his brother teaches first grade. The story is based on an actual experience he had waiting overnight to get his daughter into a preschool, and it stars local actors Jayme S. Hall, Audrey Walker, Bryce Flint-Somerville, Amanda Englund, Teresa Decher, and Mercedes Rose.

Heather and I have had the privilege of seeing it already, and we can attest, it’s a friggin funny movie. You’ll never think of Disney princesses the same, also it will make you not want to have children.

And Mike promises the Portland premiere of The Waiting List will be a freaking event, Portland style:

We’ll be promoting other Portland movies, web series, blogs, artists, podcasts–basically anyone doing their own thing–prior to the screening (more on that in a few days). After the movie, there will be a Q&A with some of the actors. Your admission ticket will also enter you in our speed raffle to win stuff, like being one of the first people to own the DVD. This is not just a screening of some local indie movie you’ve never heard of… this is going to be a freaking event!

Admission is only $5, and show time is 7pm on Thursday, February 18 at the Hollywood Theatre (4122 NE Sandy Blvd).

Enjoy the trailer below, and then go read what Heather has to say at Mile73.com – Attention: This Is Pretty Awesome