The world of wine, as I think we all know, involves a lot of snobbery, con games, and hogwash. There are also a lot of delicious wines. The Wine Trials 2010, by Robin Goldstein and Alexis Herschkowitsch, features brief reviews of the 150 wines under $15 that beat $50+ bottles in this year’s rigorous brown-bag blind tastings. The book’s basic message is to drink wines you like, rather than wines you are told you’re supposed to like. But the aforementioned snobbery, con games, and hogwash, in addition to psychology (e.g. if we think a wine is expensive, a lot of us tend to enjoy it more!?) makes this difficult. Part one of the book, The blind tasting manifesto, explores all of these issues with persuasive arguments (and scientific data!). The rest of the book consists of reviews of the 150 best liked wines, in a variety of categories, as determined by rigorous brown-bag blind tastings.

I’ve tried several wines featured in the the book and have not been disappointed. But I have not been able to find about half the wines (from both the 2009 and 2010 editions of the book), which has been frustrating. So I thought it might be interesting, and useful, to host my own blind tasting, a la The Wine Trials, with locally available wines.

For our [not so] rigorous blind tastings, we thought about trying just Oregon wines, or just one variety of wine. But ultimately we went with what we randomly found at Trader Joe’s. We know the price is pretty good, and we also know that we would be able to find these wines again, if we wanted to. The price range of the wines we selected was $7.99-13.99 (which at Trader Joe’s is almost high end). 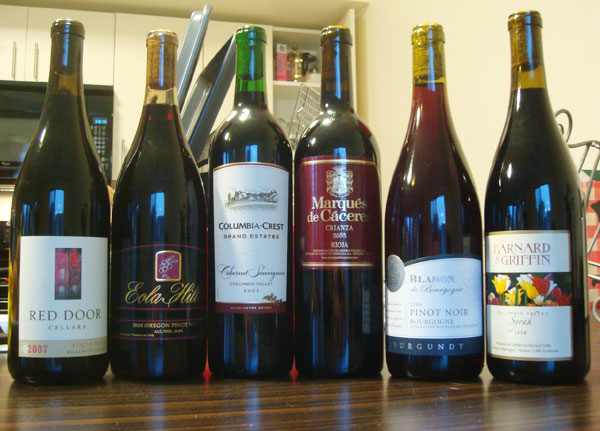 As you can see, our wine selection contains a mix of styles. It may have been more useful to stick to heavy or light red wines, but I, for one, don’t always know if a wine is heavy or light based on its label. And interestingly, none of these wines made the 2010 edition of The Wine Trials, though we don’t know if that’s because they weren’t included in the trials, or if they were but didn’t perform well in the tastings. In any case, we expected our home version of the Wine Trials would be educational and fun, and hoped we might discover a couple tasty wines.

We invited a bunch of friends over, made a bunch of snacks, and wrapped each bottle in foil and attached a number. 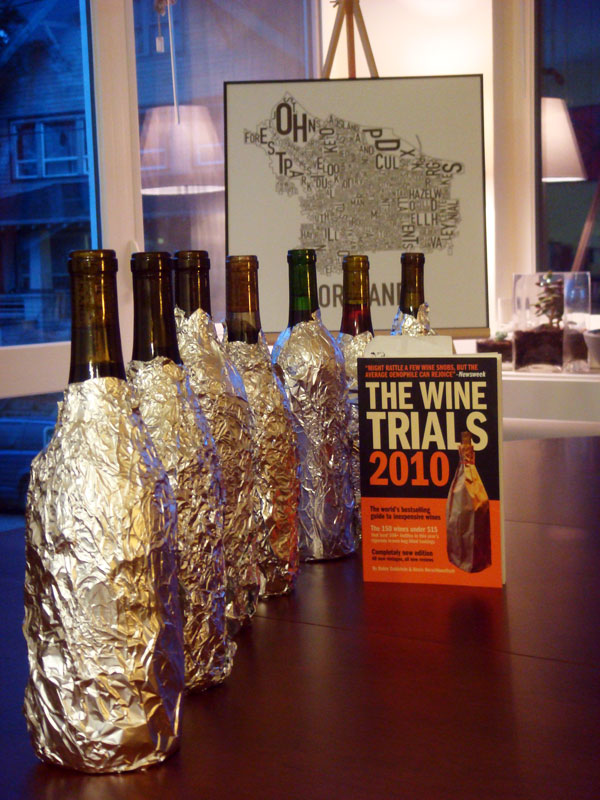 For the blind tasting we gave each of our guests one of the official Wine Trials tasting tasting forms (pdf), and set them to it. The only ground rules were no talking about the wines while tasting, and we recommended each taster start with a different wine, rather than going from 1 through 6 in order.

Below are the winners, as decided by our tasters, ranked from 1-6. The top two places ended up a virtual tie, both wines received the same number of 1st (4), 2nd (2), and 3rd (2) place votes. But wine number one also received a fourth place vote, whereas number 2 received a single 5th place vote. In the list below we’ve also included a few quotes from notes made by our guests on the tasting forms.

As you can see the Pinot Noirs did not do very well. Whether this is due to our tasters not liking the variety, or the particular Pinots we selected being of low (cheap) quality, I cannot say. We did have a few self-proclaimed Pinot fans amongst the tasters.

Visit The Wine Trials website for more information about the book, which is available, of course, at Powell’s.