In the latest issue of The Guardian, columnist Peter Preston writes about Cascadia: A World Away From Texas [can I get an atheist amen!?]

One (Olympic) flame dies – but maybe another flame flickers back into life. All hail Cascadia, the nationalist dream of a new, free land that puts the environment, culture and liberal values first? Don’t laugh (though don’t get too carried away either). The name may sound somewhere between patent water softener and Prisoner of Zenda. The logic of the idea, however, has plenty of hard thinking behind it.

In the piece he briefly explores the history of the idea, and the obvious geographical arguments: Portland, Seattle and Vancouver are an almost continuous metropolitan belt. Think Leeds to Manchester to Liverpool. 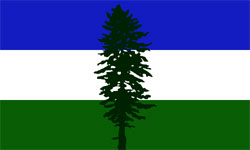 He exaggerates just a little when he declares that culturally and politically, big chunks of Oregon, Washington, and British Columbia have more in common with each other than any of them have with Texas.

And the values of politics, almost of instinctive belief, are consistent too. Abortion, euthanasia, co-ops, gay marriage – even socialism as a word that may sometimes mutter its name? Cascadia might sit quite happily just outside Stockholm. Bush, Cheney, Fox News and Tea Party Texas are a world away.

But the political reality, he points out, is that Americans are often patronisingly racist about Canada [<- Ha, he spells like a Canadian!], and stubbornly resistant to constitutional upheaval. But he does make some good points . . .

Yet why, pray, is the Canadian way – or the Cascadian way – any more outlandish than the Mad Hatter’s tea party antics currently transfixing Washington DC? And why is constitutional change, as opposed to rightwing rage, such a forbidden American subject?

Read the rest at The Guardian, and make sure to check out the lively debate in the comments (if only to confirm that much of the comments on British newspaper articles are as troll-y as those in American papers).