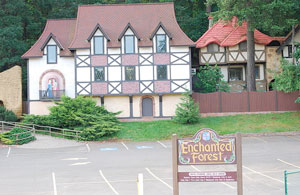 I am determined, this year, to visit the Enchanted Forest.

The park is now open – every day until March 29th, then weekends through April, and regular summer hours starting in early May.

I haven’t been to this curious amusement park off of I-5 south of Salem since I was a kid. According to the website the Ice Mountain Bobsleds were built in 1983, and if I recall correctly it was under construction when I last visited. That’s how friggin’ long it’s been.

At the Charles Phoenix show in Portland two years ago the Enchanted Forest was reintroduced to my consciousness, when in addition to his usual mid-century schtick, Charles Phoenix threw in some colorful slides taken on his recent visit to the Enchanted Forest; photos of the hand crafted characters and buildings I remember vaguely from my childhood visits. He gave us some of the history, about how against great odds Roger Tofte began building the park in the 60s, and how now it’s still a family run business. Roger Tofte and several family members were in the audience, and when Charles Phoenix asked them to rise they received a standing ovation.

When I got home that night after the show I immediately went online and bought an Enchanted Forest t-shirt and hoodie (the latter being a great score because now it’s only available in children’s sizes!).

I had planned to visit the following season, but with a busy spring and summer I forgot about it again. And then the Portland Mercury did an awesome feature on the park last summer [I wish they’d do a lot more hard hitting journalism like this!], and again my interest was piqued.

So mark my words, this year I will visit the Enchanted Forest. I will drag Heather along with me and between us we will blog the hell out of our visit. I promise.

Thanks to Trashbag for the Enchanted Forest photo