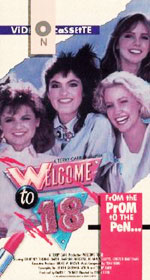 Some film I’ve never heard of, Welcome to 18, is the object of Thursday’s affection.

This film has all the charm of any other 80’s coming of age film. Okay. So it doesn’t have the charm, but it’s got the hair and bright colors. Not to mention the ridiculous montages and sugary mentality. It’s a bit like an after-school special for older teens. And they don’t forget to throw something in for Daddy. Huh huh huh.

When three good friends, recent high school graduates, find that their summer dude ranch job is more exploitation than vacation, they move to Lake Tahoe to stay at the house of a guest they met at the ranch. From there, they are plunged into the dark underbelly of South Lake Tahoe! Will they come out unscathed?

Show starts at 7pm. Admission is free, but there’s an entirely optional suggested donation of $5. 21 and over only, there’s a bar!