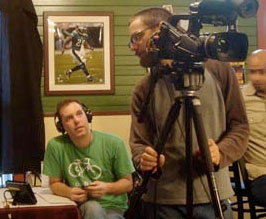 We are all pretty well aware that Portland is full of creatives. It’s sometimes hard to know what it means to be “A Creative.” If I had to venture a guess, local film maker Mike Vogel would be a good example. Mike’s first feature length film, The Waiting List, has just come off a successful run on the indie film festival circuit. Mike has written a book, produced a slew of short films, and is currently working on his second feature length film, Did You Kiss Anyone? All while working a full time day job and raising kids. Oh, and in true Portland fashion, he rides a bike to work, even in the snow.

We first became familiar with Mike Vogel’s oeuvre when during Snowpocalypse 2008, he produced a hilarious parody of breathless weather news hype. Since then we’ve had the pleasure of being “Twitter friends” with Mike and have been able to visit a couple of sets for his current project. He kindly took some time away from his busy schedule to answer a few questions for us. — Heather

When I used to think about making movies, I always thought I needed to make movies like A Clockwork Orange or Apocalypse Now. I didn’t even want to attempt to make a movie until I could make The Godfather or something like that. Which is totally ridiculous and will pretty much ensure you never make a movie. I wrote a few screenplays before The Waiting List, but it was the first one I wrote with the idea that I would direct it. That’s why it takes place in mostly one location with a handful of actors.

Do you have an academic background in film making? Or are you self taught?

In college I was an English major. Then I went to technical school to learn editing and all the technical stuff, but it was more public access oriented than narrative movie oriented. The thing I gained most from the public access philosophy was just this manic “Yes! Let’s do it! Create!” All energy and limited resources. Or figuring out your limitations and turning them to your advantage. Each movie is sort of like school though. On the first day of my first movie, I literally didn’t know when I was supposed to say Action. You can take classes and read books and discuss with peers, but really the only way to learn is to do and to make mistakes and then try not to make those mistakes again.

You seem to be a late night cereal eater. Which cereal is your favorite and why?

Frosted Flakes. I love Apple Jacks but it seems like eating a bowl of candy. I’ve been known to dump graham crackers or animal cracker in a bowl and pour milk over them. Trader Joe’s animal crackers in milk is pretty awesome. I still eat cereal out of an orange half-basketball shaped bowl that I got from Wheaties back in the Michael Jordan days.

You are from here, and your family is here, and you live here, but why are you still in Portland? Wouldn’t LA or New York be better for an aspiring film maker?

I honestly can’t imagine a better city for an aspiring filmmaker than Portland. You’ve got a ton of talented actors to work with. There’s an amazingly supportive community–not just film community, but the communities in Portland itself. If I want to use a location, I just walk in and ask if I can shoot a scene for a movie. Most of the time, after you finally get a hold of the right person, the answer is yes. We’ve filmed all over the city and have never had a cop ask if we had a permit. That includes when we shot a scene where Amanda Englund was getting attacked and screaming loudly. Two cop cars pulled up and watched ominously from a distance. We did another take and they zoomed off. There’s a saying that LA is the only place where you can die from encouragement. I think Portland’s community actually provides support, not just encouragement.

You’ve made a number of funny shorts, your feature length film, The Waiting List has just finished the festival circuit, and you are currently working on your next project, Did You Kiss Anyone? Through all your projects, what is the most useful thing you’ve learned about film making? What is the most challenging thing?

The most useful and challenging thing as a director is saying “Let’s do another take.” If your gut didn’t tell you that was the perfect take, then do another. Sometimes I can’t even identify why I want to do another take and later when I watch the footage I’ll realize my brain caught something I couldn’t identify while on set. Ultimately my job as director isn’t to do some crazy camera move or compose a shot so it evokes a similar shot by Truffaut or something like that. My job is to make sure the actor’s performances tell the story. Although if we’re shooting a funny scene, it’s easier because you just make everyone talk faster.

How many names of fish can you name in 30 seconds? (no cheating!)

You write, you act, you direct, and you do camera work. You probably do other stuff too. What’s your favorite part of film making?

I don’t really act. I just pretend to be an even more awkward version of myself. And I don’t really do the camera work. That’s mostly my Director of Photography, Brian Mohr and he’s pretty good about understanding what I’m going for based on the script, which frees me up to focus on performances. I love each aspect of the process, but the thing that brings everything together is editing. I work with Evelyn Geree, who’s this self-taught editor doing bizarre abstract personal stuff, but I know her from a family connection so she helps me out as long as I don’t force her to join Twitter.

Can you talk a little bit about water boarding your kids?

Waterboarding My Kids Is Not Torture – watch more funny videos

Some people see that and think I really waterboarded my daughter. It was actually my brother’s My Buddy doll from childhood. The idea came from the argument that waterboarding isn’t torture, so that must mean I can punish my children that way. I look so serious in that video though. My favorite part is at the end when I deliver the punchline and my (then) 2 year old daughter laughs on cue.

If your fairy godmother offered a crapload of money to make a movie, like unlimited budget, what kind of movie would you make? Would you blow stuff up and stuff? (hint: blowing stuff up is the correct answer.)

There’s a guy in town making a movie called James Vs. Reality and I don’t think he has a crapload of money from a fairy, but he’s blowing things up. Granted, he’s an insanely talented computer animator. But for me, sometimes I’ll see the Tram and dream about a Portland re-make of The Nighthawks, where a terrorist stops the tram and threatens to blow it up. Other times I picture the Portlandia statue coming to life and just stabbing at people with her pitchfork–it’s not a trident, it’s a pitchfork! When a 3D camera was announced at some trade show, I joked that I would make a 3D movie where it looked like someone was sitting in the row in front of you. It would just be a normal movie, only you’d wear 3D glasses and have your view obstructed by a tall person wearing a cowboy hat or something.

At The Waiting List screening, you mentioned these films are part of a trilogy. What’s next? And will Gandalf be in your next film?

We always joke that The Waiting List has about five endings, like the final Lord of the Rings movie. But yes, so I have an idea for a Domestic Trilogy. The first part was The Waiting List, which focused on parenting. Now I’m working on Did You Kiss Anyone? which focuses on marriage. The third one will likely be about extended family, or grown-up siblings. I was originally going to do one about Work, but that’s been pretty played out and after seeing that French movie Summer Hours last year, it made me realize how badly most American movies about families are. Everyone had to be histrionic or “psychotic.” Everyone’s always yelling and bringing up old injuries and eventually people cry and hug. Summer Hours felt to me more what it’s like when you’re grown up with siblings. So I plan to rip that movie off and include a scene where Portlandia harpoons the entire family in 3D. Fade out.

Mike blogs at MikeVogel.com. His nano-budget film production company is called Front Ave. And Mike is on Twitter too: @FrontAve.