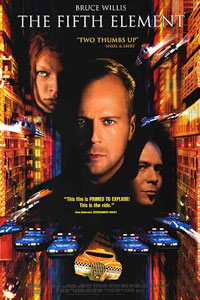 The Fifth Element (1997)
Two hundred and fifty years in the future, life as we know it is threatened by the arrival of Evil. Only the fifth element can stop the Evil from extinguishing life, as it tries to do every five thousand years. She is helped by ex-soldier, current-cab-driver, Korben Dallas, who is, in turn, helped by Prince/Arsenio clone, Ruby Rhod. Unfortunately, Evil is being assisted by Mr. Zorg, who seeks to profit from the chaos that Evil will bring, and his alien mercenaries.