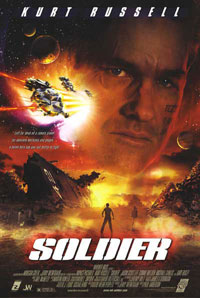 Sergeant Todd (Russell) is a veteran soldier for the an elite group of the armed forces of Earth. After being defeated by a new breed of genetically engineered soldiers, he is dumped on a waste planet and left for dead. He soon interacts with a group of crash survivors who lead out a peaceful existence on the planet. The peace is soon broken as the new breed of soldiers lands to eliminate the colony, which Sergeant Todd must defend