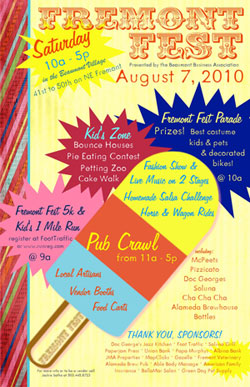 The fest runs from 10am until 5pm.

A Pub Crawl, from noon until 4pm, is part of the festivities too! At tables near the main stage and Doc George’s Jazz Kitchen (4605 NE Fremont) pick up your mug and 5 tokens for $10 ($1 each additional taste). Then stop in at the Alameda Brewhouse, McPeet’s Pub, Pizzicato, Soluna Grill, and the Beaumont Market for special beers (visit the Oregon Brewers Guild blog for more details, including the specially available beers).

Portland fashion and style blog, The Neat Sheet, has a good write up about the fest here: Fremont Fest 2010! Arts, shops, music + more 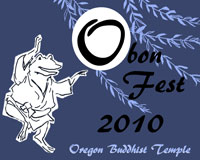 Honor your ancestors at the 2010 Obonfest on Saturday, August 7 from 3pm until 9pm.

Game 18: St. Louis 3 – Timbers 0 by mao at the Portland Timbers Blog at The Offside

Portland Timbers played their most pathetic match of the season, perhaps of all-time, in losing 3-0 AC St. Louis at Anheuser-Busch Soccer Park. Mike Ambersley, the Saint who stole points from the Timbers with an injury-time goal back in May, recorded the hat-trick with easy goals against an inept Portland defense. [more]

And for the masochists, a few more recaps:

A bit of MLS news:

The coin flip – which actually took place before the MLS All-Star game, but was broadcast on tape-delay at halftime of the game televised by ESPN2, was made to determine whether Portland or Vancouver would have first pick in the 2011 SuperDraft, expansion draft or other player acquisition opportunities. [more]

Portland Timbers: Round One of the MLS rivalry with Vancouver goes to Whitecaps by Geoffrey C. Arnold at The Oregonian

HOUSTON — The flip of a coin added more intensity to an already heated rivalry between the Portland Timbers and Vancouver Whitecaps.

The Timbers lost the coin flip that determined whether Portland or Vancouver would pick first in Major League Soccer’s SuperDraft, expansion draft or the other player acquisition opportunities. [more]

HOUSTON – The rumor mill at the MLS All-Star game was spinning quickly about the Timbers and John Spencer.

A few well-placed people implied the Spencer to Portland move was a done deal. A couple talked in terms that Spencer had already been hired. [more]

And in supporter news:

It wasn’t too long ago that MLS supporters’ groups who consistently numbered more than a hundred hardy souls per game could be counted on the fingers of one hand nationwide, and were about as popular as herpes with MLS front office folks.

Those times have changed as the groups have grown and the atmosphere and publicity they bring to MLS clubs that help them differentiate those teams in crowded sports marketplaces have been recognised by MLS headquarters and most owners. [more]

And an important date is coming up: Monday, August 2nd 2010 marks the open ordering date for 2011 Timbers season tickets. Anyone can reserve their season tickets on Monday. I recommend a Timbers Army season ticket:

Purchasing your Timbers Army Season Tickets, you do more than just reserve a place in the North End*: Ticket-buyers will receive discounts from game-day prices, invitations to special events, and commemorative merchandise marking the Rose City’s rise to this country’s top tier of professional soccer.

On top of that, part of your purchase will help fund the 107ist, the TA’s independent supporters trust, as it works to support soccer at all levels in and around Portland. [more]

And join the 107 Independent Supports’ Trust! Benefits include discounts, freebies, and special deals at Beulahland, Big-Ass Sandwiches, the Bitter End Pub, and a slew of other places around town. Join up and visit the 107ist Partners page for more information.

A sysadmin unpacked the server for this website from its box, installed an operating system, patched it for security, made sure the power and air conditioning was working in the server room, monitored it for stability, set up the software, and kept backups in case anything went wrong. All to serve this webpage.

A sysadmin installed the routers, laid the cables, configured the networks, set up the firewalls, and watched and guided the traffic for each hop of the network that runs over copper, fiber optic glass, and even the air itself to bring the Internet to your computer. All to make sure the webpage found its way from the server to your computer.

I worked for a couple years as a system administrator, and I can tell you it is a very tough job – the breadth of knowledge required to be a good sysadmin is extraordinary. Ultimately I realized I wasn’t cut out for it (but mostly I hated being on call 24 hours a day), so I went in a different career direction (three times since then).

Visit the Sysadmin Day website for gift ideas. (All I can think of on my own is Mountain Dew.)

So here’s to all the system administrators out there – may you get through day without a fire to put out! 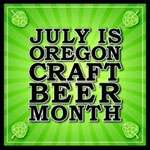 First things first – this is the last weekend of Craft Beer Month in Oregon, so naturally you have several beery events to consider:

And now on to some other activities . . .

“Two people will tell the same story from their different POVs. The second person to tell the story will be sequestered so they may not hear how the first person tells it. EXCITING!” [more]

In my salad days I was a pretty decent pinball player. My little brother, Steve, however, was a master. We played in the late-90s era Portland Pinball League incarnation at the now defunct Jockey Club on Killingsworth, where Steve racked up a number of championships. I think I placed 3rd or 4th once. [more] 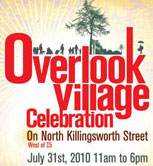 From 11am until 6pm enjoy local art and craft vendors, live local bands, a pet costume contest, a car show, and a sidewalk sale. [more]