On a recent trip to Astoria, Heather and I had dinner at Bridgewater Bistro, a great restaurant in a beautiful setting on the water, in the shadow of the iconic Astoria-Megler Bridge.

One menu option was a pleasant surprise:

After the glorious poutine, of course, boquerones are my favorite snack, but like poutine it is a rare occurrence that you’ll find them on a Portland menu. The local boquerones served up at Bridgewater Bistro were delicious, and to my palate indistinguishable from the imported ones I’d tried before. 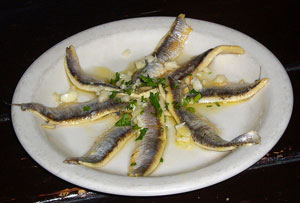 If you’ve never tried boquerones en vinagre, but are familiar with the fishiness of sardines or canned anchovies, you’re in for a surprise. The fish flavor is far less intense in a boquerone. The taste of the tiny fish filets has more in common with ceviche, I should think, than the anchovies most avoid on pizzas or a caesar salad. A fresh vinegar tartness prevails, the texture of the fish flesh is almost like fresh. Slap a couple on top of a piece of toast, or eat them from the end of a toothpick. They’re good. Especially with a cold crisp beer.

Two years ago my roommate and I hosted a Spanish themed dinner party. We made toasts with mushrooms and alioli, Spanish potato salad, and of course a paella. It was while researching these recipes that I first came across a description of boquerones. I was intrigued. I like sardines, and I use anchovies, the oily and extraordinarily fishy kind, in recipes whenever it makes sense. But I figured it’d be too difficult to find the ingredients to prepare my own boquerones. So imagine my surprise when I stumbled upon Spanish boquerones at New Seasons. I bought some and served them up at the party. They were a delicious hit.

And now, as evidenced by the menu entry at the Bridgewater Bistro, we have a local option. Recently the Daily Astoria ran a pair of articles about the nascent domestic boquerones.

Astoria Pacific Seafoods‘ anchovies are available in Astoria at both the Bridgewater Bistro and Fulio’s Pastaria. In Portland they can be found on the menu at Clarklewis and at Whole Foods.